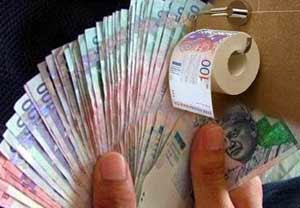 The value of the ringgit is expected to drop further as Malaysia’s economy heads for its worst performance this decade.

Malaysians will likely have to fork out more money to buy goods and services traded in US dollars in the coming months.

A Bloomberg report quoting analysts says the ringgit will head south if Bank Negara Malaysia (BNM) makes another interest rate cut, as they expect it to do.

It will also depend on what the US Federal Reserve does.

One analyst even predicts the value of the ringgit may go as low as RM4.40 to the US dollar in December, if a rate cut seems imminent.

The depreciation in the value of the ringgit, and the state of the economy, is largely due to the drop in crude oil prices and the negative sentiments arising from the 1MDB saga.

The ringgit is the region’s biggest loser in the past month and analysts still see scope for it to drop more than 2 per cent by year-end, says the report.

“The currency’s slide highlights all is not well as the nation’s economy heads for its worst performance this decade.

“Crude oil’s plunge to a four-month low this week undermines the finances of net oil exporter Malaysia, while the appeal of its relatively high bond yields is being tempered by the scandals surrounding a troubled state investment fund,” says the report.

It adds that Rabobank Group and UBS Group AG both predict BNM will make another rate cut in the coming months.

The ringgit will weaken to 4.10 per dollar by the end of September and 4.15 by year-end, according to the median estimates of analysts surveyed by Bloomberg.

UBS projects the central bank will make another quarter-point rate cut by early next year and that the ringgit will weaken to 4.40 per dollar by the end of December in anticipation.

However, JPMorgan Chase & Co predicts the ringgit will stay between 3.90 and 4.10 per dollar in the second half as Malaysia’s relatively high bond yields attract investors.

That scenario would only be threatened if the Federal Reserve were to raise interest rates at the same time as Bank Negara cuts them, its foreign-exchange analysts say, the report adds.

Bloomberg points out that the ringgit is linked to oil prices as Malaysia derives 20 per cent of its revenue from energy-related sources.

The nation loses RM450 million in annual income for every USD1 decline in oil.

The ringgit has dropped 1.3 per cent in the past month, underperforming regional peers which all recorded gains except for the Philippine peso and Indonesia’s rupiah. The currency traded at RM4.052 per dollar as of 11.11am in Kuala Lumpur on Thursday, after being as strong as 3.142 in August 2014, when oil was still above USD100 a barrel.

Bank Negara unexpectedly cut its benchmark interest rate by a quarter point to 3 per cent on July 13 to bolster growth, and analysts say pressure is building for another move.

“Malaysian export growth continues to be weak, a common problem among emerging-market economies, and the current-account surplus is expected to narrow further, which could put pressure on the currency when portfolio inflows slow,” Maximillian Lin, a currency strategist at UBS in Singapore, was quoted as saying by Bloomberg.
Posted by wikisabah at 5:04:00 PM