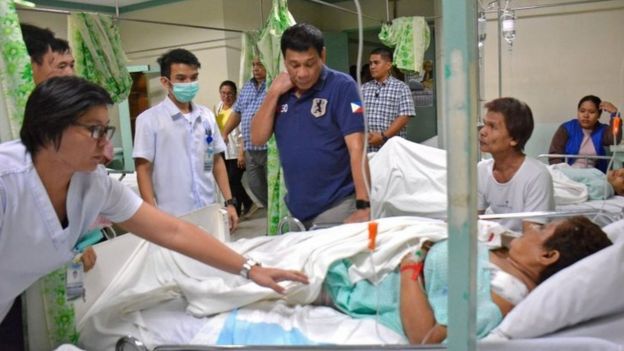 DAVAO - The Abu Sayyaf militant group was responsible for a bomb attack in the home city of Philippine President Rodrigo Duterte which killed at least 14 people, the government has said.

Dozens were wounded in the blast at a market in the southern city of Davao.

Mr Duterte - who was in Davao at the time of the blast but was not near the market - has declared a "state of lawlessness" following the explosion.

This allows troops to be based in cities to assist the police.

National Defence Secretary Delfin Lorenzana said that Abu Sayyaf wanted to retaliate after suffering heavy casualties on its stronghold of Jolo island about 900km from Davao.

"We have predicted this - and warned our troops accordingly - but the enemy is adept at using the democratic space granted by our constitution to move around freely and unimpeded to sow terror," Mr Lorenzana said in a statement.

A presidential spokesman said investigators had found shrapnel from a mortar-based improvised explosive device (IED) at the scene.

Police in the capital Manila are on high alert following the deadly blast.

At least 60 people were injured and 30 were taken to hospital.

The explosion took place outside the Marco Polo hotel in an area frequently visited by Mr Duterte.

Broken glass and plastic chairs were scattered at the scene, which has since been cordoned off by police bomb experts and investigators.

"The force just hurled me. I practically flew in the air," witness Adrian Abilanosa told the AFP news agency as bodies lay strewn amid the debris.

The president said the Philippines was going through "extraordinary times" which was why he had decided to allow the security forces to conduct searches previously done solely by the police.

A spokesman for the militant group Abu Sayyaf claimed responsibility soon after the attack, but the authorities initially said they were considering the possibility that drug syndicates were behind it.

The region has been under a heightened security alert in recent weeks because of a military offensive against Abu Sayyaf.

Regional police chief Manuel Guerlan said a ring of checkpoints had been placed around the city's exit points.

"A thorough investigation is being conducted to determine the cause of the explosion," he said. "We call on all the people to be vigilant at all times."

On Monday at least 12 soldiers were killed in clashes with militants in what was the deadliest day for Philippine troops since President Duterte was elected in May.

His election has prompted a spike in drug-related killings, with more than 2,000 deaths since he took office on 30 June, nearly half of them in police operations.

Davao is the biggest city in the southern Philippines and has a population of about two million people. It is about 1,500km (932 miles) from the capital Manila.

The city is part of the southern region of Mindanao, where Islamic militants have for decades fought a separatist insurgency that has claimed more than 120,000 lives.

Mr Duterte was mayor of Davao for much of the last 20 years before winning elections in a landslide this year and being sworn in as president on 30 June.

He has been credited for bringing a degree of peace and order to Davao through his tough security policies, while simultaneously brokering deals with local Muslim and communist rebels.
Posted by wikisabah at 4:18:00 PM