Neutralising Abu Sayyaf not an easy job for Duterte 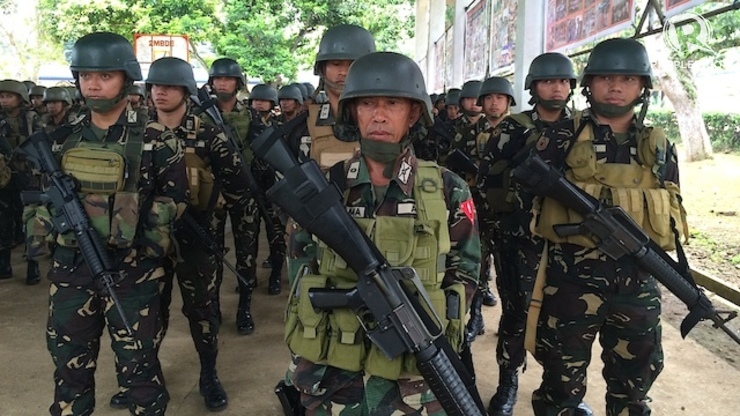 Most Filipinos were hoping that the Duterte Administration would be able to neutralize the Abu Sayyaf gang in weeks. But the latest killings of 15 soldiers in Sulu prove that the goal is not so easy to achieve.

MINDANAO, Philippines – When the death toll of Abu Sayyaf Group members touched 70 during the military offensive in Basilan and Sulu in August, most Filipinos thought it was the beginning of the end of the group’s more than decades-old reign of terror in Mindanao.

With a tough, new president Rodrigo Duterte leading a war on drugs and militancy, they had a reason to believe so. He recently ordered the deployment of five more battalions in Sulu and more forces in Mindanao islands.

But within a fortnight, the 400-strong Abu Sayyaf hit back by killing more than a dozen of Philippine marine soldiers in Sulu, and three army scout rangers in Basilan in separate encounters.

After the soldiers’ killings, pressure was mounting on Duterte to declare a state of emergency in Sulu but he did not make such a move.

Among the latest casualties were 15 foot soldiers, including an army lieutenant, who were ambushed – some of them beheaded – by a group of 70 heavily armed Abu Sayyaf fighters led by Commander Radilon Sahiron. Twelve soldiers were also seriously injured in the attack.

Philippine media said it was the worst single day loss of life for the government troops this year.

One of the wounded soldiers who was later interviewed by a local radio station said the enemy was in a very advantageous position when they (soldiers) were attacked.

“We were in search of the enemy when a group of ASG fighters appeared atop a hill and started raining bullets on us from high-powered firearms. We managed to fight back,” the soldier, who requested anonymity, said from his military hospital bed in Mindanao.

In its latest threat on Thursday, Abu Sayyaf said instead of waiting for soldiers to assault its positions in Sulu, the group will now launch attacks on them.

Abu Sayyaf spokesman Alhabsi Misaya, who works under Radulan Sahiron, described the looming battles with government soldiers as “the last war of Patikul to the finish.”

This “jihad” involving more than a thousand members of the group will be more fierce than that in Zamboanga, Misaya said.

The three along with their infantry team were in search of suspected members of Abu Sayyaf when they were attacked by the group in the restive province of Basilan.

The 8,000-odd soldiers deployed in Sulu and Basilan are unable to capture Abu Sayyaf militants who know the jungle terrain like the back of their palm and also have the community support.

In Indanan, Sulu, three marine soldiers of the Marine Battalion landing team were ambushed by suspected Abu Sayyaf members while they were on their way to procure food for their battalion.

The August carnage was among the bloodiest encounters since the military offensive began in Basilan and Sulu provinces after Duterte became the country’s commander in chief.

At the height of the offensive in Sulu, Abu Sayyaf beheaded an 18-year-old student hostage Patrick Almodovar after his family failed to deliver the $21,700 ransom on August 24, the deadline set by the group.

Analysts say the beheading of the student will discourage civilian sympathizers from supporting the Abu Sayyaf as it shows how inhuman the group can be.

Dr. Adrian Semorlan, Asian Sociology Professor, said to Asia Times that the Abu Sayyaf can easily be wiped if local residents support the military by providing them with information on the militants’ hideouts.

“The government has to find ways on how to get the support of the community on where Abu Sayyaf leaders reside,” Semorlan said.

Most Filipinos were hoping that Duterte’s iron hand would neutralize the Abu Sayyaf gang. But the latest killings prove that it is not so easy to achieve that goal.

Abu Sayyaf is ambushing their enemies and killing hostages to counter Philippine’s military offensives in Basilan and Sulu, a stronghold of the IS-inspired Abu Sayyaf.

Abu Sayyaf is likely to procure more sophisticated warfare gadgets and get the support of villagers as they have received $1.08 million ransom money in exchange for the release of their Norwegian hostage, Kjartan Sekkingstad.

The group has not yet announced when Sekkingstad would be released. But reports reaching Asia Times say Abu Sayyaf is demanding more ransom. Earlier, it was asking for $6.5 million.

Norway’s Ambassador to the Philippines Erik Forner has been seeking the help of Duterte for the safe release of Sekkingstad.

Aside from the Norweigian national, Abu Sayyaf is holding 22 other hostages. Among them are eight Indonesian sailors, eight Filipinos, five Malaysians and Dutch national Ewold Horm who was abducted in the province of Tawi-Tawi while watching sea birds in the islands in 2012.