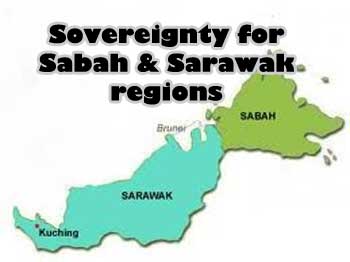 The vocal demands of the current Sarawak Chief Minister, Tan Sri Adenan Satem, in relation to his state’s rights have raised the stakes for autonomy as never before.

On the occasion of the 53rd anniversary of the formation of Malaysia (16 September 2016), the people on the Peninsula should give serious attention to the concerns expressed by an increasing number of groups and individuals in Sarawak and Sabah about the rights of their two states in the Malaysian Federation. These concerns have become louder and more persistent in the last two or three years.

What explains the rising crescendo? The emergence of the Sarawak and Sabah vote as the Barisan Nasional’s fulcrum of power in Putrajaya in the wake of the 2013 General Election is undoubtedly a major factor. It is because Sarawak and Sabah politicians are conscious of the power they now wield over the federal government that they have become more assertive on behalf of their states. In this regard, the vocal demands of the current Sarawak Chief Minister, Tan Sri Adenan Satem, in relation to his state’s rights have raised the stakes for autonomy as never before.

Besides, in both Sarawak and Sabah, the middle class is larger than it was a decade ago and there are many with tertiary education who are more than aware of their states’ rights under Sarawak’s 18 Points and Sabah’s 20 Points. Equally important, there is a pervasive perception among segments of the populace that grievances articulated a couple of decades ago still remain unresolved.

The Federal Government under Dato Sri Mohd NajibTun Razak has set up a committee led by Cabinet Ministers from Sarawak and Sabah to address relations between the Centre and the two states. From another perspective, the establishment of a Royal Commission of Inquiry in August 2012 to investigate how citizenship was allegedly acquired by illegal immigrants to Sabah on a massive scale over a few decades was a step in the right direction though the implementation of its findings has been patchy at best. Likewise, infrastructure development in both states — including the Pan Borneo Highway —would be very much in line with the people’s aspirations. If local communities benefit directly from such development it would help to strengthen relations between Putrajaya, on the one hand, and Kuching and Kota Kinabalu, on the other.

For some influential strata of society in Sarawak and Sabah, development is inextricably linked with the question of autonomy. The right to control their own resources, especially oil, to collect their own revenue, to manage their own finances and to decide on their own tariffs, would only be possible if the autonomy of the two states is honoured and respected.

Ensuring a much bigger and more effective role for Sarawakians and Sabahans in their own public services would also be an essential prerequisite for strengthening autonomy.

The Federal Government has to acknowledge that autonomy in administration and development has been compromised in the course of the last 50 years or so as the Centre has concentrated more and more power in its own hands. This is partly because of the bureaucratic tendency to centralise authority especially if the instruments of power are controlled by a dominant Executive operating within an environment where there is minimum accountability.

Devolution of power and authority as demanded by a genuine federal system of governance should be the commitment of Putrajaya as it re-appraises relations with Kuching and Kota Kinabalu. Indeed, devolution and decentralisation should be given serious consideration as the way forward for our entire system of governance in the nation as a whole.

There should be no fear that decentralisation will lead to the disintegration of the Federation. As a general proposition, decentralised federations such as Canada have proven to be much more resilient than highly centralised federations such as the demised Soviet Union. There is a reason for this. When the rights of the component units within a national structure are respected and their roles celebrated, they develop an affinity with the larger entity. It is this affinity that persuades them to commit themselves to the well-being of the totality.

Of course, it goes without saying that if decentralisation and autonomy are to succeed, they should be accompanied by policies that aim to enhance integration and unity at the same time. We already have instruments and institutions that can achieve these goals. The Malaysian Constitution which attempts to balance interests including State and Federal rights is one such instrument. Parliament, the Judiciary and the Constitutional Monarchy are institutions that have helped to sustain a united nation.

The Rukunegara with its five objectives and five principles is another instrument of integration whose potential has yet to be realised. It is significant that it commands widespread support in Sarawak and Sabah. It would be a sound platform for developing popular consciousness of the values we share in multi-religious Malaysia. Emphasising shared values in the various facets of life would in fact constitute yet another inclusive approach to nation-building which unfortunately has received little attention from the policymakers.

More than shared objectives, principles and values, it is shared interests that will hold a diverse federation like ours together. An earnest endeavour to facilitate greater interaction among Sarawakians, Sabahans, and Peninsular Malaysians is vital in the growth of shared interests. Apart from travel and physical exchanges, the new communication technologies afford a huge opportunity for the development of shared ventures in trade, investment and economic enterprise in general. It is these shared interests borne of the new technologies that were not present when Malaysia was formed 53 years ago that will unite Sarawakians and Sabahans, on the one hand, with Peninsular Malaysians, on the other, separated as we are by a vast expanse of water that challenges our bond as one people.

Comment by Dr. Chandra Muzaffar is the Chairman of the Board of Trustees of Yayasan 1Malaysia.
Posted by wikisabah at 4:14:00 PM