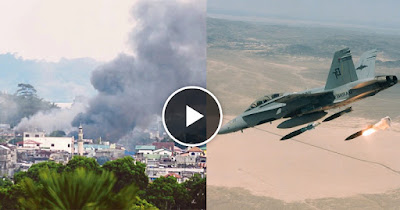 Radio dzBB's Allan Gatus reported that the military continued the airstrikes as they believe that the remaining Maute group members in the city are still in possession of rocket-propelled grenades, improvised explosive devices and other high-powered firearms.

This, despite an earlier pronouncement by Task Force Marawi spokesman Lieutenant Colonel Jo-Ar Herrera that the Maute group may already be running out of ammunition.

The military said that as of June 18, a total of 257 militants have been killed and 25 firearms have been recovered from them.

The government's side have so far lost 62 men while 26 civilians have been confirmed killed by the Maute group since the attack in the city on May 23, which prompted President Rodrigo Duterte to declare martial law in Mindanao. —Marlly Rome C. Bondoc/ALG/KVD, GMA News
Posted by wikisabah at 1:09:00 PM