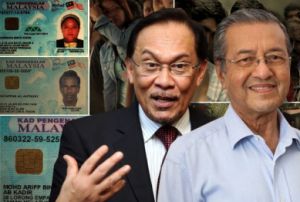 According to Malaysiakini, the PKR de facto leader said it did not matter that the former prime minister suggested himself for the position.

“It is not for him (to decide), it is for Harapan (to decide),” he was quoted as saying by the news portal.

“People don’t volunteer (to be prime minister), there has to be a consensus.”

Dr Mahathir last week claimed he did not aspire to return to the post he had held for over two decades, but said he would not discount the possibility if “friends” in the opposition pact saw fit to ask.

The Parti Pribumi Bersatu Malaysia chairman’s remark also comes after his open rejection of Anwar for the position.

Dr Mahathir refused to display placards endorsing Anwar as the “seventh prime minister” during PKR’s annual assembly last month, and later confirmed that he did not support his former deputy for the post.

The incident has triggered further discord within the informal pact comprising DAP, PKR, Amanah and PPBM.

It would also require Anwar to somehow obtain a royal pardon, which would then remove his disqualification to contest the by-election that he must win in order to be able to hold the post.
Posted by wikisabah at 2:06:00 PM