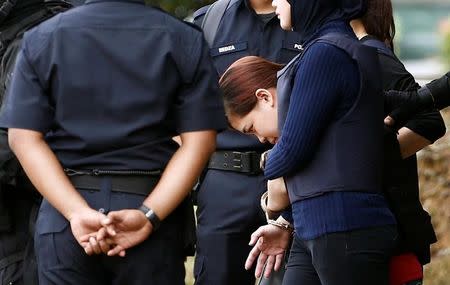 KUALA LUMPUR (Reuters) - The trial of two women accused of killing the estranged half brother of North Korea's leader will begin on October 2, Malaysia's High Court said on Friday.

Indonesian Siti Aisyah, 25, and Doan Thi Huong, 28, from Vietnam, are charged with murdering Kim Jong Nam at Kuala Lumpur airport on Feb. 13 by smearing his face with VX, a chemical the United Nations describes as a weapon of mass destruction.

Both appeared in the High Court in Kuala Lumpur on Friday, where the date for the trial was decided.

They could face the death penalty if convicted.

(Reporting by Rozanna Latiff; writing by Praveen Menon; Editing by Neil Fullick)
Posted by wikisabah at 11:11:00 AM