Unity, reality and reciprocity: Europe brings down the barriers for Xi Jinping in Paris 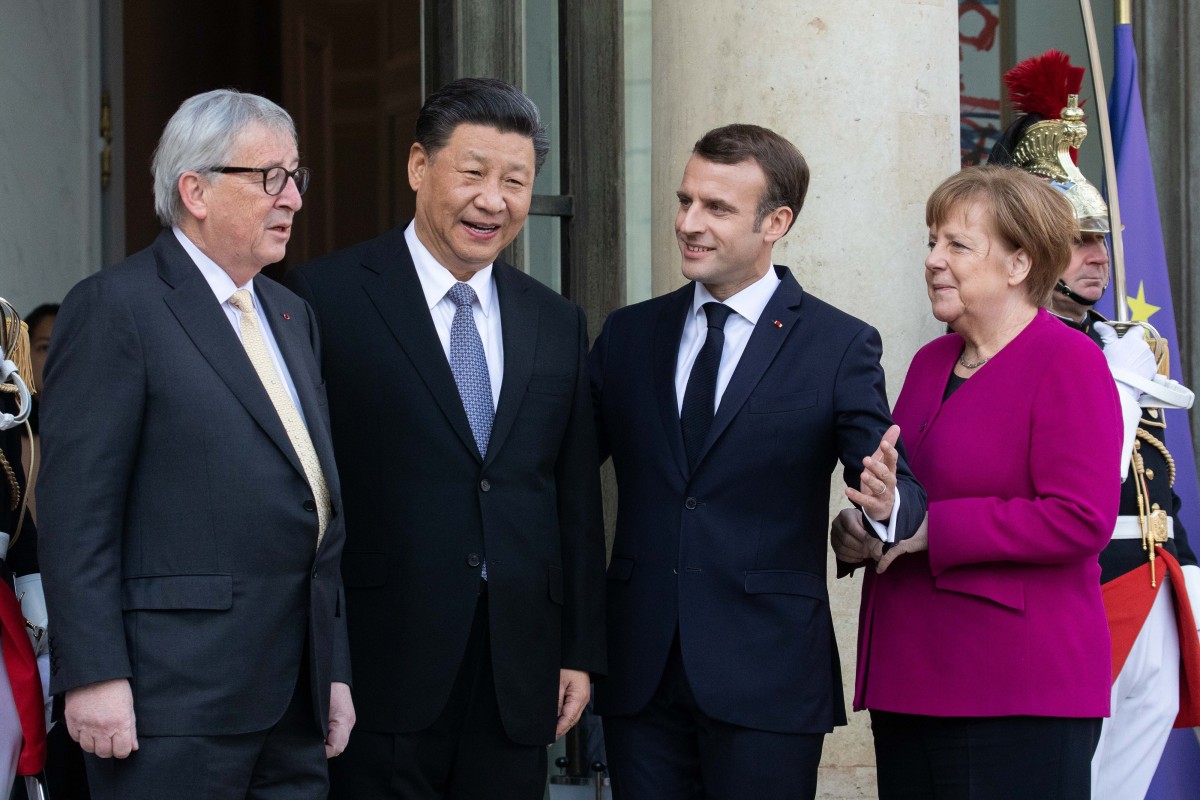 Chinese President Xi Jinping’s week-long Europe tour ended on a surprisingly positive note in Paris on Tuesday, with a rare show of unity between Beijing and Brussels despite a gathering storm in China-EU relations and pressure from the United States.

The trip, which also included stops in Italy and Monaco, was originally scheduled as part of a longer visit that would have culminated in Xi’s second summit with US President Donald Trump in Florida. But the Mar-a-Lago leg was cut as Chinese and American negotiators failed to iron out an agreement to end their months-long tariff war.

Instead of focusing on grievances about Beijing’s unfair trade practices, unfulfilled promises of reform and oppressive domestic policies, the European leaders struck a conciliatory tone and made a joint effort to call for a more balanced, reciprocal relations with China.

Chinese President Xi Jinping’s week-long Europe tour ended on a surprisingly positive note in Paris on Tuesday, with a rare show of unity between Beijing and Brussels despite a gathering storm in China-EU relations and pressure from the United States.

The trip, which also included stops in Italy and Monaco, was originally scheduled as part of a longer visit that would have culminated in Xi’s second summit with US President Donald Trump in Florida. But the Mar-a-Lago leg was cut as Chinese and American negotiators failed to iron out an agreement to end their months-long tariff war.

Instead of focusing on grievances about Beijing’s unfair trade practices, unfulfilled promises of reform and oppressive domestic policies, the European leaders struck a conciliatory tone and made a joint effort to call for a more balanced, reciprocal relations with China.

They even praised Beijing’s “Belt and Road Initiative”, an infrastructure drive at the centre of Western countries’ wariness of China’s global ambitions, and chose global governance, one of Xi’s favourite topics, for the Tuesday summit at the Elysee Palace.

The unprecedented gathering, which Macron described as an effort to “establish a common definition for a new international order”, was supposed to deal with “challenges of multilateralism”, a veiled rebuke to Trump’s protectionist policies and his unilateral vision of the world.

European leaders are keen to present a united front on China, but just like Xi they knew only too well that worsening relations with the US meant neither side could afford a showdown, observers said.

Their joint appearance and repeated appeals for a win-win relationship with Beijing were a well-orchestrated response to Xi’s weekend success in persuading Rome to be the first Group of 7 country
to endorse the belt and road.

Nicola Casarini, a senior fellow for Asia at the Institute of International Affairs in Rome, said it was the first time France, Germany and the European Commission had spoken with one voice on China.

“Macron wants to show that there is European unity – at least between Europe’s two leading nations and the commission – on how to deal with China,” Casarini said.

“His message was to Italy, which signed the memorandum of understanding on the initiative without consultation with the EU.”

It was also intended for the 16 central and eastern European countries, including 11 EU member states, accused of helping China divide the EU by signing up for the belt and road, Casarini added.

Although EU leaders expressed interest in Xi’s initiative, also known as the “New Silk Road”, they stressed the need for “reciprocity”, something Beijing has been reluctant to touch on.

“We, as Europeans, want to play an active part” in the belt and road project, Merkel said after the talks. “That must lead to reciprocity, and we’re having a bit of trouble in finding it.”

Juncker, who will host an EU-China summit in Brussels on April 9, was also blunt.

“European companies will need to find the same level of openness when it comes to their access to China’s internal market as the one Chinese companies find in Europe: a level of total openness,” he said.

Chinese state news agency Xinhua did not refer to the remarks by Merkel and Junker.

“The statements during the meetings were more of a courteous expression, and were not very substantive,” said Oliver Rui, from the China Europe International Business School in Shanghai.

Analysts said European leaders had a difficult balancing act, caught between Trump’s trade offensives and pressure to side with Washington in its geopolitical and technological rivalry with Beijing.

Wang Yiwei, a European affairs expert at Beijing’s Renmin University, said France and Germany were being deliberately ambiguous about the belt and road and Chinese telecommunications giant Huawei because of lacklustre economic conditions in Europe.

Washington has demanded that European allies not use Huawei’s technology, saying it creates a security risk by potentially letting Beijing snoop on sensitive communications. But Germany and France have not ruled out using the company’s equipment in their next-generation telecommunications networks.

“France and other European nations may be bitter about China’s growing influence in Europe and have to echo Washington’s concerns on the Belt and Road Initiative due to their obsession of ‘political correctness’, but they are also keen to attract Chinese investment to tackle domestic economic woes,” Wang said.

Germany, Europe’s biggest economy, is stalling over weaker exports, trade tensions and China’s economic slowdown, and the European Commission warned a month ago that France was vulnerable because of its high public debt, weak competitiveness and anti-establishment protests.

Macron, a staunch EU supporter who styled himself as a pro-business reformer, has seen his popularity plummet over the protests, rising income equality and poor economic growth.

“With Merkel stepping down [in 2021], Macron sees an opportunity to seek the EU leadership. But given his domestic headaches, he needs China more than ever,” Wang said.

Macron, who is critical of Italy’s concession to China and leading an effort towards a united, tougher stand on Beijing, avoided any public discussion during Xi’s visit of contentious issues from Huawei to Beijing’s mass detainment of hundreds of thousands of Uygur Muslims in Xinjiang.

“I don’t believe in the efficiency of confrontational postures, but in a demanding spirit of cooperation,” Macron said during talks with Xi on Monday.

The EU’s relations with the Trump administration have also hit a low point over the US president’s punitive trade policies, his disdain of the transatlantic alliance as well as Washington’s withdrawal from its global leadership role and the multilateral trading regime.

Casarini said the EU was caught in the escalating rivalry between Beijing and Washington, and would side at times with the US, and other times with China.

“EU-US coordination is evident in Europe’s tougher stance on China adopted in the last weeks, as a result of increased transatlantic cooperation on China. EU-China cooperation is also evident on climate change and on the Iran nuclear deal – both China and the EU want to save the deal and are ready to challenge Trump on this issue,” he said.

At the same time, Xi saw an opportunity to forge closer ties with Macron, offering China’s support for France to “play a leading role in the process of Europe’s uniting for self-improvement” and asking France to exert a more positive influence on China-EU ties, according to Xinhua.

“France is more independent from the US than most other European powers in terms of its industrial policy, security and geopolitical approach. Xi’s remarks showed Beijing is willing to continue to invest in Macron, who has the potential to lead the EU and help China dispel growing anti-Chinese sentiment in the continent,” Wang said.

Chinese analysts also noted a lack of consistency from Paris on the belt and road since Macron’s visit to China in January last year.

“As long as Macron wants to adopt a transactional approach on flashpoint issues such as the belt and road, China would be happy to play along and strike deals with France,” Wang said.

Steve Tsang, director of the SOAS China Institute in London, said that despite Xi’s repeated pledges of support for multilateralism and European integration, his chequebook diplomacy involving €42.5 billion (US$47.8 billion) in business deals in Italy and France revealed Beijing’s real intentions.

“While the EU wants to have good and mutually beneficial relations with China, it cannot fail to see that the biggest deal is Beijing’s success in getting Italy to break rank with the founder states of the EU. Call it what you will and Beijing can say what it wants, this is what will be seen in the EU as reflecting the real intentions of Xi,” he said.

Thomas Eder, a research associate at the Mercator Institute for China Studies in Berlin, also said that for European leaders, further integration and unity were of primary importance.

“It was really important to draw the line, publicly, when it comes to China respecting European unity. This is obviously still an ongoing process, but this was a step taken with that in mind – both that the three of them met with Xi together, and that these kinds of statements about European unity could be made with Xi sitting next to Macron.”

But Eder admitted that in the long run, EU powers would have to take a public stand on the belt and road.

“Nothing has really changed when it comes to the interest in cooperating with China on connectivity, on infrastructure between the EU and China, and globally. What has changed over the years is that more scepticism has come in both on government and business sides regarding how much European companies can really profit when it is a [belt and road] project,” Eder said.

“It’s become more clear to the European side that this is also about getting more prestige and influence for the Chinese government by having governments around the world endorse Xi Jinping’s initiative and thus Chinese foreign policy.”
Posted by wikisabah at 2:58:00 PM