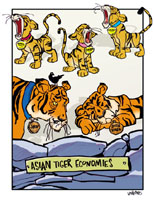 SHAH ALAM - An economist has questioned Malaysia’s title as an “Asian Tiger” economy, saying the nation only ever qualified as a “little tiger” or “little dragon”.

Speaking at a forum at the Rise of the Asian Tiger Convention at UiTM Shah Alam, Madeline Berma said the actual four Asian Tigers were Taiwan, South Korea, Singapore and Hong Kong.

She added that Malaysia was simply a second-tier Asian economic power, and voiced concern that the “little tiger” had teeth that were “not growing”.

When Malaysia was first recognised as a “little tiger”, she said, there was excitement as the nation was elevated to an international platform.

There was also optimism that the economy could grow to become one of the Asian Tigers.
Economist Madeline Berma.

But the financial crisis of 1997 dampened its progress, she said, warning that history could repeat itself if the government is not careful.

Berma also spoke of inequality in the country which she said could be addressed by “giving rights to others”.

“People in Sabah and Sarawak are still left behind. They deserve extra help and support,” she said, adding that in this case, equality was not the point.

In Malaysia, she said, inequality is no longer “horizontal”, that is, an issue of gaps between different races and ethnicities.

“We are not saying that we have solved the horizontal problem. It’s just that the dynamics are now different,” she said, adding that differences between Bumiputeras and non-Bumiputeras must be set aside as well.

Economist Zouhair Rosli, who was also on the panel, panned the main objective of becoming a high-income nation in the New Economic Model (NEM), calling it “useless”.

“Take the nation’s total income and divide it by the whole population,” he said.
Economist Zouhair Rosli says the development gap under the NEM model has worsened.

He cited figures from the Department of Statistics showing that 5.5 million workers from a total of 11 million earn below RM1,900 a month.

“I’m not saying we can’t rely on that objective at all. We can,” he said, adding however that it does not focus on the second objective of inclusivity.

Even the second objective, though, has widened the divide between rural areas and cities through its heavy emphasis on infrastructure development in key cities such as Kuala Lumpur, Johor Bahru, Kota Kinabalu and Kuching, he said.