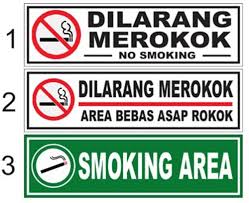 KOTA KINABALU - Two activists here have differed over the government’s plan to introduce a new law to increase the number of no-smoking zones in public places.

Consumer activist Patrick Sindu said while he understands the intentions behind the proposed stand-alone Tobacco Control Act, people who smoke also have rights. Rights activist Beverly Joeman meanwhile welcomed it but said it should be properly implemented.

Sindu said he had seen smokers heeding the no-smoking restriction at all eateries, a ban enforced on Jan 1 that he welcomed, without much complaint.

“Why do you need to enforce this act and that? You can’t enforce too much on people who light up.

“Instead of going after smokers and eateries, why doesn’t the government, for instance, put more beds in hospitals in Sabah, which is more needed, or handle other welfare needs of the people?”

The health ministry recently announced its commitment to a stand-alone Tobacco Control Act in the near future which would see most public places designated as no-smoking zones.

Minister Dzulkefly Ahmad said, however, that there would still be certain public places available for smokers to light up.

He said it is not his or the ministry’s intention to outlaw smoking, but that the move is to ensure the public, especially women and children, do not fall victim to secondhand smoke.

Sindu said some eatery operators, especially local coffee shops, had complained of dwindling business because of the no-smoking ban at eateries.

“I am not a smoker but I understand their frustration. These are the usual places for ordinary people to have their chats over a cup of coffee and a puff of cigarette.

“The initial ban is fine and it is good particularly for air-conditioned outlets, but the government needs to look at this carefully so that it does not further complicate things for people who want to smoke.”

He suggested that eateries and restaurants designate specific areas at their premises for smokers, adding that the government, in turn, should allow this.

Instead of enacting new laws, he urged the government to intensify awareness campaigns on the dangers of secondhand smoke to non-smokers.

Joeman meanwhile said she agreed with the proposed plan.

“But enforcing such an act calls forth other questions: does the health ministry have enough enforcers to see through the enforcement of the law?
Posted by wikisabah at 2:09:00 PM