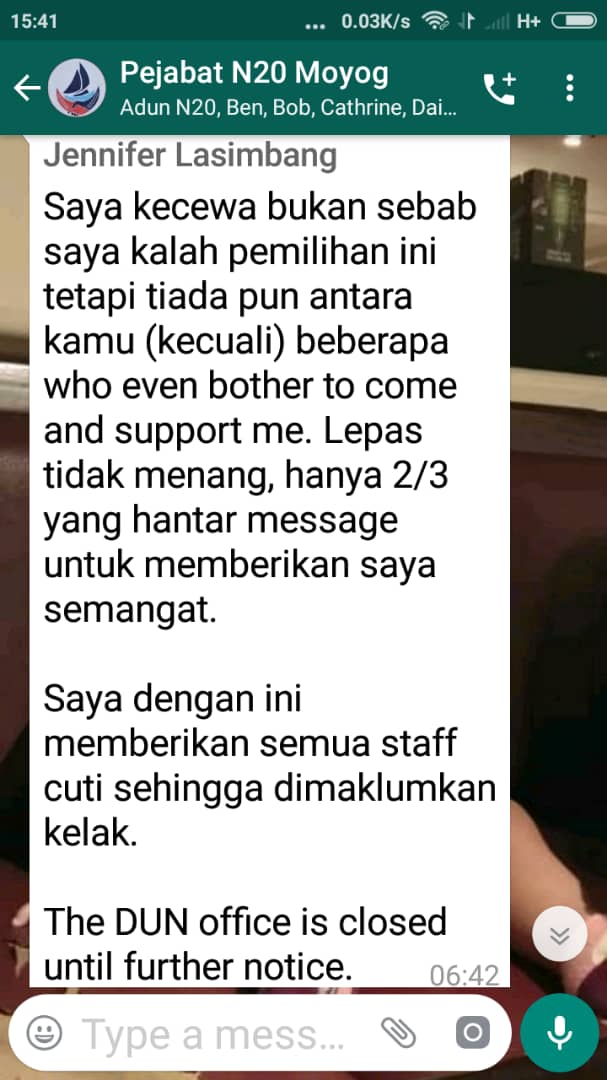 She yesterday clarified that her plan to close down her service centre had nothing to do with her feeling disappointed with her staff for their lack of moral support to her after she lost a Warian party election recently.

The Assistant Education and Innovation Minister said the WhatsApp message that she wrote and shared among her staff that had been leaked and widely circulated on social media, appeared to suggest that she had dismissed all her staff as a result of them not showing support to her for her defeat.

The WhatsApp message that Jenifer wrote and shared among her staff, has been leaked and widely circulated on social media.

Although she admittedly had expressed disappointment with her staff for not giving her support, it had nothing to do with her instruction for them to go on leave until further notice and the closing down of the office.

Jenifer maintained that the WhatsApp message she shared was only meant for her and her staff but was leaked out by an irresponsible individual.

She clarified that she had been thinking about closing the office for quite a while now and to set up a mobile office instead in order to better serve her constituents. She believes that a mobile DUN office would be better for Moyog as it could cover a wide area where the communities are scattered.

The asssemblywoman also said that the plan to go mobile was also due to the realisation that there have been overlapping roles between the DUN office and Unit Pemimpin Pembangunan Masyarakat (UPPM).

She has six dedicated staff in the DUN office and ten in the UPPM office, and stressed that she has never asked them to resign but only to take leave as she is now revamping the office. 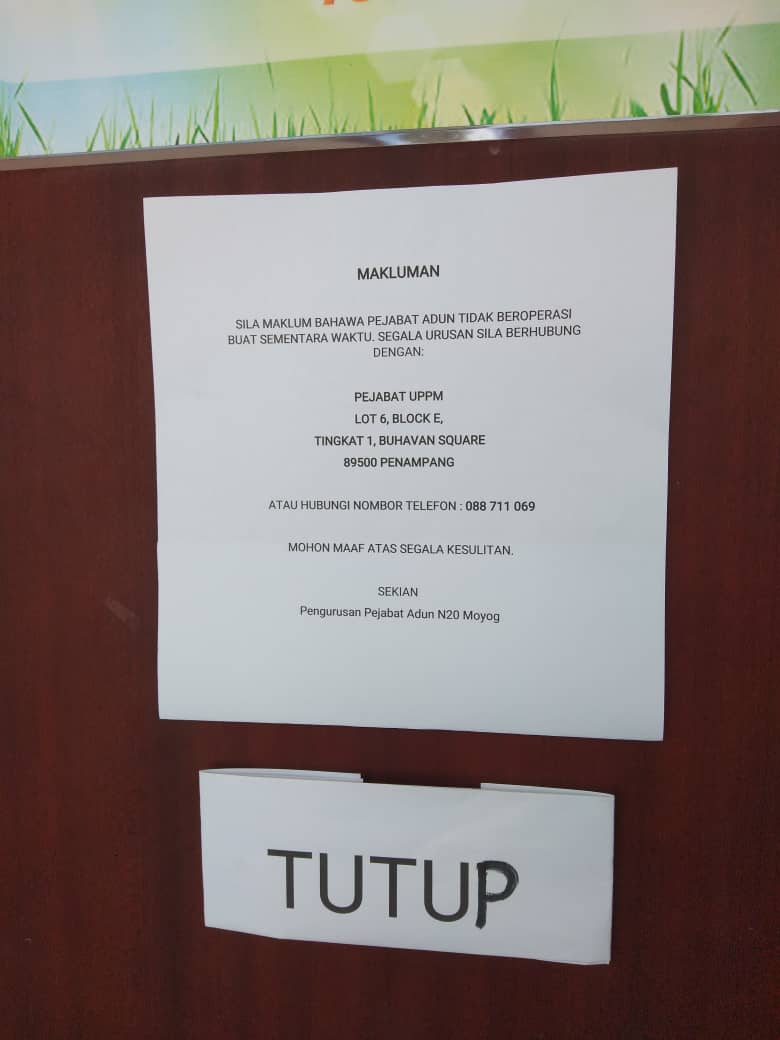 Notice to announce the temporary closing of the Moyog service centre.

She intends to turn the existing DUN office into a creativity and innovation centre for entrepreneurs in her constituency, similar to that of the Malaysian Global Innovation & Creativity Centre (MaGIC).

When asked about the statement issued by Parti Gagasan Rakyat Sabah Youth chief Patrick Chong, urging her to resign, she replied tersely: “I was elected by the people of Moyog, not by him.”

Chong yesterday urged Jenifer to quit if she was feeling sick and tired again.

He said the service centre was of utmost importance as it served as a convenient contact point for the rakyat to contact Jenifer and for her to better serve her constituents.

He said closing the centre based on her personal mood and for personal reasons was highly unprofessional as she was not carrying out her responsibility to serve her constituents as a representative.

Ever since her infamous “sick and tired” post on Facebook, not many voters dared to call her directly nor speak to her, but rather preferred to convey messages to her through the service center, he said, adding that by closing down the service center, her supporters and Moyog voters might find it even more difficult to relay their problems and requests to her.

Chong reminded Jennifer that her salary was being paid by taxpayers and that her duty was to serve the rakyat.

He strongly urged Jennifer to resign from her post as an elected Moyog representative if she was really getting sick and tired and  could not cope with the work.

He said there were a few other appointed assemblymen such as Terrence Siambun, Senator Adrian Lasimbang (Jenifer’s brother), State Assembly Speaker George Ginibun, Senator Datuk John Ambrose and an  elected member of parliament who could extend a good hand to manage the Moyog Service Centre well.

In March, Jenifer was criticised after she posted on Facebook that she was “getting sick and tired” of messages from parents asking her to look for jobs for their children, who are unemployed graduates.

However, she stood firm on the controversial post and said she had other duties to attend to, and that while she was willing to do many things for the people, giving jobs to unemployed graduates was not one of them.
Posted by wikisabah at 3:59:00 PM