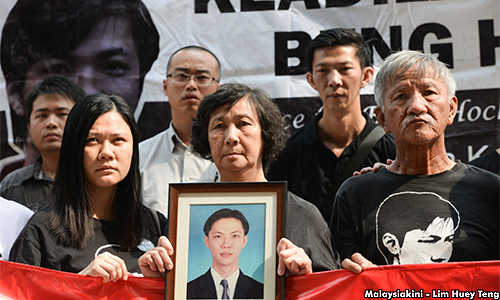 Latheefa, however, did not elaborate on the matter.

"As I have said, whether it is an internal or external investigation, I cannot comment.

"We are the party being investigated. We can only confirm and commit to cooperate with the investigations. I cannot comment (further)," she told reporters on the sidelines after a opening regional workshop promoting beneficial ownership transparency in South-East Asia on Monday (July 22).

Latheefa said this when asked to comment on calls by Gerakan for MACC to conduct an internal investigation into its own investigative procedures.

Gerakan said the investigations would determine whether there were elements that could have led to the death of Teoh, at the time the political aide to then Selangor executive councillor Ean Yong Hian Wah.

Recently, the police said it would comply with instructions from the Attorney-General's Chambers to conduct further investigations into Teoh's death.

Teoh was found dead on the fifth floor of Plaza Masalam in Shah Alam several hours after he was interrogated by Selangor MACC at its office on the 14th floor of the same building In 2009.