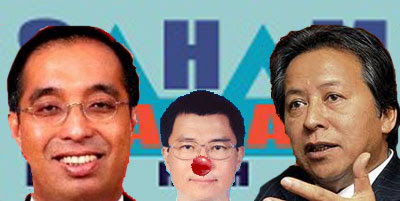 1. This letter is written with a view to disclosing the TRUTH hidden in the disastrous loss of SAS, which has been twice rejected the presentation of TRUTH in White Paper by the overwhelming majority of BN assemblymen at the Sabah State Assembly.

2. At first glance, you would come to the simple (as kindergarten) conclusion that "I am from SAPP" and "I am speaking for Yong Teck Lee". My simple and instant reply is: Bullshit!! Let me tell you this: I've never been a SAPP member and neither am I paid / or instructed to write!

3. As regards the purpose of writing, my answers which are clear, simple and unequivocal are given below:

i) I write for the God / Tuhan I believe.

But, people join politics for the mere purpose of political position and monetary gains and still claim that they believe in God are not only self-deceiving but also insulting God / Tuhan. Such deceitful politicians also include those who claim themselves "clean and honest" but apply every means to cheat the peoples and twist the laws like Tun Mahathir as manifested in his relentless means to topple the PBS government in Sabah, to kick Tun Musa Hitam Datu Sri Anwar and Tun Abdullah Badawi down from their respective high positions, making every attempt to put his son in the top political position in Malaysia.

ii) As a true believer of God/Tuhan, a fortunate, (or unfortunate) insider who happened to have a chance to "know" the TRUTH, I have long suffered insomnia by watching anti hearing the Satanic covering-up and twisting of TRUTH.

4. Those who refuse or decline to tell the Truth can be classified into three categories, namely, (a) they themselves are the extremely few (the true and genuine culprits like Anifah Aman and Datuk Salleh) who took or stole the hundreds of million ringgit from SAS ; (b) those who have no share in the millions of dollars stolen / taken but would benefit abundantly by helping to cover-up (e.g. Dr. Yee Moh Chai); (c) those who were inevitably involved in the scandal like a person fallen into a sewerage tank. (e.g. Datuk Yong Teck Lee).

5. As I do not have a personal agenda for political gains, I would simply present the Truth in a Question and Answer (Q and A) manner as follows:

Q. Who were the real and actual culprits that caused the downfall of SAS?

A. They were Anifah Aman, the beloved brother of Datuk Musa Aman, Chief Minister of Sabah today and Datuk Salleh Said Keruak , former C.M. of Sabah

Q. How did they manage to get the hundreds of million ringgit out from SAS, causing the value of SAS to fall from RM1.00 p. share to below 20 cent p. share over a period of two years?

A. To be brief, it was an "insider trading'". The gigantic amount of cash was "stolen" from SAS via the so-called acquisition of Repco shares. That is, Datuk Salleh who was then Chairman of Saham Amanah Sabah acquired the "tissue-paper" shares (with blown-up price) of Repco manipulated by its Chairman Anifah Aman using the SAS fund.

In consequence of the "insider trading", hundreds of million ringgit were gone from SAS while Repco became a billionaire overnight. To be more specific, Anifah Aman (brother of Datuk Musa Aman) and Datuk Salleh became billionaires overnight.

Q. Was the "insider trading" completed over a few days or a few months / years?

A. In principal, it should be within a few weeks. But, to cover up their sin and crime, they took months or years to complete the acquisition of "cash" and the sharing among themselves, (whom you could never find out because they were all "private deals")

As Datuk Yee M.C said at Dewan Undangan Negeri, the hundred - million ringgit loss of SAS occurred over a period of two years. That implied the "crime" could have occurred and completed long before or even after Datuk Yong left his C.M post.

Q. What is the significance of time sequence in this matter (SAS)?

A. Let us study the sequence of events as follows:

1) Before Tun Sakaran stepped down from the C.M. post, Saham Amanah Sabah (SAS) was launched in late 1994 by the DPM/ Federal Minister of finance, Datuk Anwar Ibrahim. Datuk Salleh was the State Minister of Finance then.

Datuk Yee has been deliberately confusing and misleading Sabahans with the time sequence of the tragedy.

Q. What was Datuk Salleh's role in this scandal?

A. Without his approval as the Chairman of SAS, the transfer would never have been possible.

Q. Did Datuk Yong Teck Lee know and benefit from the Devil's deal as described by Dr. Yee Moh Chai?

A. The answer could be "yes" or "no" depending on the government's willingness to "confirm and certify" the Truth. Neither Datuk Yong nor Dr. Yee can confirm to that effect.

As the Devil's transaction was conducted between SAS and Repco, Datuk Salleh (then Chairman of SAS) and Anifah Aman (Chairman of Repco) did not need the approval of Yong (C.M. until 27 May 1998) to acquire the hundreds-of-million ringgit worth of SAS units (fund) by means of Repco's "tissue paper" shares.
Besides, if Yong had been so smart and so cunning as Yee described, why should he use Repco to accomplish such juicy Devil's deal, knowing too well that Repco did not belong to him? But, Dr Yee has all the time been smart and cunning enough to avoid mentioning of Repco in the loss of hundreds of million ringgit from SAS as proved in his argument on the issue at the Dewan Undangan Negeri Sabah.

There was indeed a mysterious "restraint" by Dr. Yee in his deliberate and enthusiastic attack on Yong even though he claimed to know the truth about the collapse of SAS. He never mentioned or questioned Repco's role.

Q. How about the Federal leaders' role in the SAS scandal?

A. To my logical understanding, they (P.M, D.P.M or Minister of Finance) came to know about the deal almost as soon as Yong knew it. Legally speaking, all unusual and tremendous deals concerning shares or fund of Public companies must be reported to the Minister of Finance by the Security Commission or the Federation of Investment Managers Malaysia.

The SAS deal was devilish enough for them to report to the Minister of finance. (Subsequently the P.M) because:(i) the tissue-paper shares of Repco were blown up to an impossible margin of prices in order to match and accommodate the acquisition of SAS trust fund;(ii) the total fund (or money) involved was over a few hundred millions: (iii) the fund belonged to the people of Sabah.

But, the Federal leaders did nothing and has remained silent until today, even though the newspapers and Dewan Undangan keep talking about it. We all know that Dr. Yee wanted Datuk Yong to admit the crime and punish himself. It was indeed weird for a professional lawyer like Yee to give judgment in the absence of a qualified Justice, which reminded us of the late Augustine Paul who heard Anwar's case during the upside-down history of Malaysia.

Q. What are the considerations behind the Federal leaders' "protection" for the culprits of SAS financial disaster?

A. I would answer your question by putting another question of similar nature back to you. Why have the Federal leaders never made any clear, solid, legal actions against the culprits involved in the multi-billion ringgit corruption cases (which they called "malpractices" or "mismanagement") of Bakun Hydro-electric Dam? Perwaja Steal project? Port Klang free Zone? And many others.

If you know the answer to these Devil problems, you have also got the answer to the SAS scandal and its tragic losses. 1 need not remind you that Tan Sri Chong Kah Kiat left the State Cabinet not really because of Kudat Ma-Tzu statue but rather, because of the hidden corruption case relating to Pulau Sipadan. Chong was framed to walk into the shadow of a "corrupted practice" committed by Big Boss just as much as Yee M. Chai wanted Yong T. Lee to repeat the same.

Q. What conclusive remarks would you give to summarize the SAS scandal?

A. i) My first and foremost concern is Datuk Joseph P. Kitingan, Huguan Siou of the Kadazans. He is a true believer of God / Tuhan. Telling and getting committed in blatant lies would push him towards Hell. I want to stop it by disclosing the Truth.

ii) Anifah Aman and Datuk Salleh have very obviously caused the tremendous loss and collapse of SAS. But, they have "somehow behaved themselves" by keeping quiet, leaving Yee M. Chai and Herbert Lagadan to play the role of a guilty clown by twisting and covering up Truth which, they claimed to know.

iii) While I give no guarantee that Datuk Yong was not involved in the scandals relating to SAS, I maintain that a full disclosure and open investigation (not P&C) be conducted. Other than that, it is either bullshit or blatant lies. If Dr. Yee does not like the idea of White Paper, he can have the disclosure presented in Yellow Paper or Red Paper.

To my understanding, Bibles are normally printed on white paper.

iv) Despite his persistence lies about SAS scandal (20% Truth plus 80% lies?), Datuk Yee and his associates in politics have made a highly remarkable contribution to Sabahans.

Thanks to Yee's persistent outcries in the press and Dewan Undangan Negeri "like the little clown jumping up and down. making people laugh" (as Datuk Yee himself described) in a deliberate attempt to cover up the crime committed by Datuk Salleh and Anifah Musa, we would not have heard the bitter debate about White Paper. Neither would I have the incentive to write this letter in an attempt to relieve Datuk Huguan Siou (Pairin) from the on-going lies in the light of a true Christian / Catholic.

Finally, I want to add that Datuk Joseph F, Kitingan is a good guy BUT for three reasons he could never be a good Chief Minister.

1st  he is a Kadazan leader, not a UMNO leader.
2nd he is vulnerable in character.
3rd if he or Yong has been the mastermind of Repco / SAS scandal, they would have been sentenced to prison by now! Subsequently, Datuk Yee's role as a clown would also have been redundant.

Letter to the Editor by insider

Email ThisBlogThis!Share to TwitterShare to FacebookShare to Pinterest
Labels: SAS