TAWAU - Member of Parliament for Tawau Datuk Chua Soon Bui has censured the alleged police brutality on Bersih 3.0 participants, and the journalists covering the event, in particular, describing it as a form of “state-sponsored terrorism”.

She pointed out that such was a popular tactic usually deployed by despotic governments around the world, to instill fear and to stifle the dissenting masses. 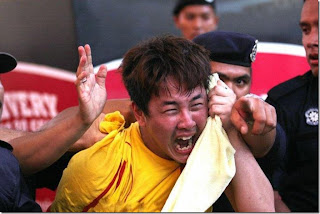 She was especially regretted with the alleged assault of the journalists, foreign journalists included, describing it as a serious violation of the principles of democracy and liberty of journalists to perform their duty and task in a peaceful environment.

“The confiscating of memory cards and cameras belonging to reporters was obviously an attempt to cover up and to eliminate evidence of such shameful act during the peaceful rally. Besides, it was also aimed at deterring the reporters from carrying out their job professionally, without fear and favour,” she said. 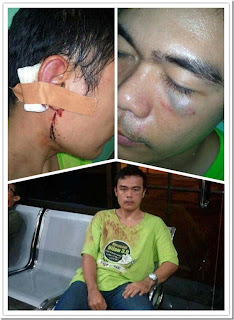 Chua also suspected the so-called ‘riot’ by the Bersih 3.0 participants as reported by the media, was as the result of staged provocation by the “agent provocateurs” planted by a certain quarters.

“There’s no reason for the Bersih 3.0 participants to create trouble as they fully understood that it was a peaceful sit-down rally. Those individuals who breached the barricades at the Dataran Merdeka are rather suspicious. They could be the ‘agent provocateurs’,” she said.

She reiterated that in the first place, there shouldn’t be an issue to allow for the peaceful rally at the proposed venue, which is essentially a public open space.
She also reminded that the Parliament has in last November passed the Peaceful Assembly Bill.

“The freedom of expression is part of a democratic process especially when it was done in accordance to the law. Furthermore, the demand for electoral reforms is a legitimate one,” she said.

She thus called for an independent inquiry to thoroughly investigate into the alleged police brutality on Bersih 3.0 participants, and the journalists covering the event.

She said this was urgent and appropriate since it involves the police who are supposed to be the people’s protector, instead of becoming an aggressor. 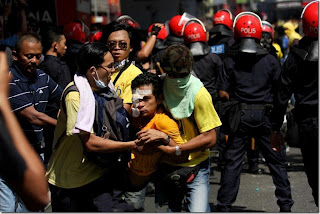 Chua who is also a Vice President of Sabah Progressive Party (SAPP) stressed that the responsibility of initiating an independent inquiry now lies on the Prime Minister Datuk Seri Najib Tun Razak, which is also in line with his signature slogan of ‘People 1st. Performance Now’.

“This (an independent inquiry) would be more meaningful than a mere apology to the reporters who were assaulted by the police,” she said. 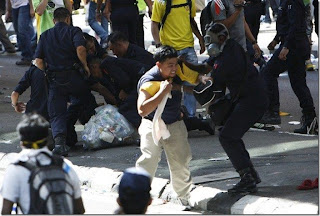 Besides this, she also expressed both shock and regret over Home Minister Datuk Hishammuddin Hussein’s response on the police confiscating of memory cards and cameras belonging to reporters, describing it as proper and in accordance to the military Standard Operating Procedures (SOP).

She said this clearly demonstrated that the Home Minister was trying to cover up and defend the wrongdoings of those police personnel involved in the alleged police brutality.
Posted by wikisabah at 5:30:00 PM