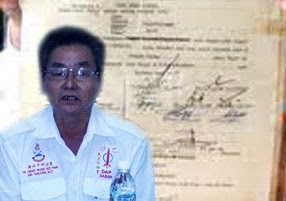 SRI TANJUNG DAP assemblyman Jimmy Wong’s native certificate which had often been questioned during the State Assembly sittings, was officially revoked by the Sabah government yesterday.

Local Government and Housing Minister Datuk Hajiji Mohd Noor told the House that the decision was made by a special board appointed by the Head of State through the Government Gazette in 2010 after a thorough investigation into the issue.

“He (Wong) has claimed to be a Sino-Kadazan, which contradicts his family lineage because there is not a single drop of Kadazan blood inside his body as both of his parents are Chinese, as stated in his birth certificate.

“With that, the Board found that YB Jimmy Wong does not fulfill Section 2 (1) Interpretation (Definition of Native) Ordinance. The decision has been referred to the Kota Kinabalu Native Court (KKNC) and that his native certificate is cancelled,” said Hajiji, followed by thunderous claps from the backbenchers.

Making the announcement when reading his winding up speech, he, however, added that since the KKNC had just been gazetted in December last year, the decision would only be implemented at a later date.

Sekong assemblyman Datuk Samsudin Yahya asked what action would be taken against Wong for faking his status and for abusing the certificate to buy native lands, Hajiji replied that it was up to the KKNC to decide.

“After highlighting this issue for the last six to seven years at the assembly, I am finally happy that this thing is finally settled,” said Samsudin, complimenting the Local Government and Housing Ministry for a job well done.

On the call by Balung assemblyman Datuk Syed Abas Syed Ali to recognise the Indian, Bugis and Arabs as natives, Hajiji disclosed that to date, recognitions were based on the Interpretation (Definition of Native) Ordinance 1952.

“I brought this to the House because in the past, the Indians and my grandfather, who is an Arab, were appointed as native chiefs. My question is, if they were recognised as natives, why were their grandchildren denied the status?” said Syed.

Assistant Minister to the Chief Minister’s Department Datuk Radin Malleh, who is a Murut, also questioned whether he was also considered a native in Sabah.

“This issue is new and interesting, and I would like to know the true definition of native? To my understanding, the Arabs will be natives in the Arab countries, the Chinese are natives in China and white people are natives in European countries … so being a true Murut, am I a native in Sabah?” asked Radin.

At this point, Hajiji took charge and told the House that the issue was sensitive and that the ministry would study and learn the true interpretation of the word.

“This is serious and sensitive, so we would need to check it thoroughly before coming up with a decision,” he said.
Posted by wikisabah at 5:16:00 PM