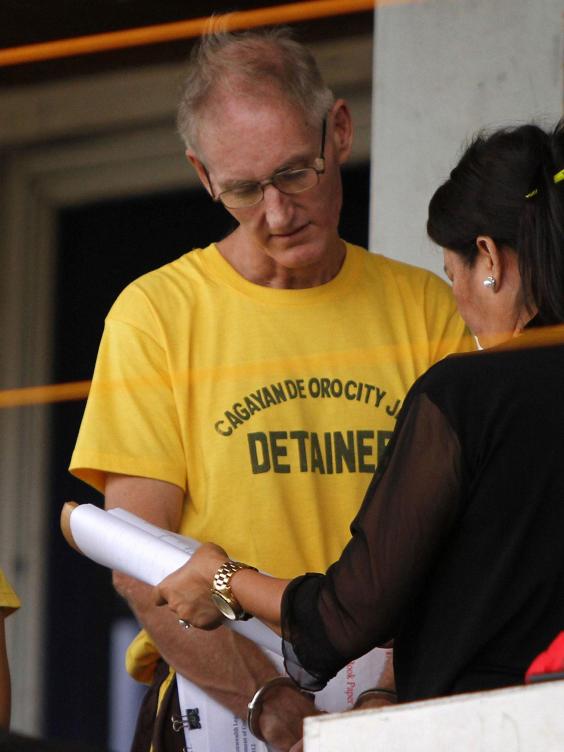 Prosecutors in the Philippines are calling for the death penalty to be reintroduced as punishment for alleged Australian child sex abuser Peter Scully.

Scully, 52, is accused of directing child sex abuse videos involving torture and selling them through the dark web.

He is being investigated for a total of 75 charges, including the alleged rape of an 18-month-old girl. He has pleaded not guilty.

"If I had my choice it would be death for Scully. I want it to happen," chief prosecutor Jaime Umpa said, according to Fairfax Media.

He added: "We have to send a strong message to others that if they come to the Philippines and torture and abuse our children in this way they will be investigated with the full force of the law and executed."

On Tuesday, a court heard that Scully allegedly directed a video called "Daisy's Destruction," which shows a baby girl being sexually assaulted and bashed while tied upside down by her feet, The Sydney Morning Herald reports.

Police also accuse Scully of burying an 11-year-old under the floor of a house he was renting after he made a video of him raping her then strangling her to death, news.com.au reports.

Two of his victims were allegedly recorded digging their own graves while being continually raped.

"They were the most devastating thing I have ever seen," Ruby Malanog, one of the two lawyers prosecuting Scully, said.

"I cried when I was watching them," Ruby Malanog, one of two lawyers prosecuting Sully said. "It was hard to believe what I was seeing... that somebody could do those things to children."

Mr Umpa said that unless the death penalty was reintroduced, prosecutors would push for Sully to be given a maximum sentence of life imprisonment for human trafficking, in addition to 10 years for each of the five sexual abuse charges - a total of 100 years in jail.

However, Philippine law means Sully would be released after serving 30 years and deported to Australia for the rest of his sentence.

Capital punishment was outlawed in the Philippines in 2006 following opposition from the Catholic church, but President Rodrigo Duterte has called for criminals who commit "heinous" including rape to be executed.