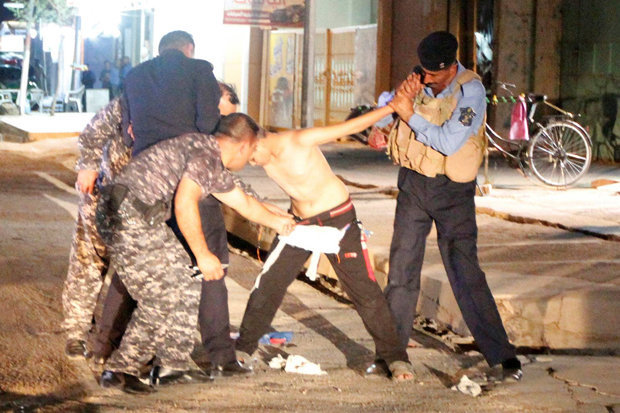 SHOCKING footage has emerged of a boy being stripped of an explosive bomb belt just moments before an attempted terror attack.

The young lad – aged between 12 and 13 – was stopped by police before the bomb exploded in Kirkuk, north of Baghdad.

The boy reportedly burst into tears after he was arrested by police.

It is unclear if the youth was a brainwashed jihadi or he was forced into the attack by twisted ISIS militants.

A security official said: “There is a dangerous campaign tonight against Kirkuk."

It is claimed the young teen was going to be blown up outside a Shia mosque in the area.

This story comes after Turkish officials claim a suicide bomber as young as 12 was responsible for the deaths of 51 after he detonated at a wedding on Saturday.

There are now growing fears that ISIS are turning to children to their launch deadly attacks.

The terror cult has proudly launched the "Cubs of Caliphate" movement – using methods more extreme than the Hitler Youth in Nazi Germany.

Another ISIS propaganda unit is also believed to have created an Arabic app which uses weapons to teach the alphabet – causing fears ISIS brainwashing children before they even start school.
Posted by wikisabah at 5:58:00 PM