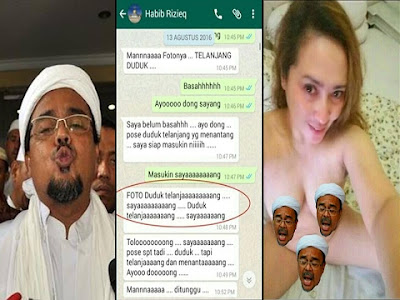 JAKARTA - A Indonesian Islamist leader who helped organise mass protests against Jakarta’s Christian governor has been named a suspect in a pornography case, police said Tuesday, as authorities seek to rein in hardliners.

Shihab, who is also being investigated by police over a separate defamation case, is currently out of the country after travelling to Saudi Arabia on pilgrimage and has failed to return despite repeated summons from the police for questioning.

Analysts said it was the latest evidence the government of President Joko Widodo was seeking to clamp down on radicals in the world’s most populous Muslim-majority country as fears mount they are growing increasingly influential.

Shihab was a key figure in organising a series of mass rallies last year against Jakarta governor Basuki Tjahaja Purnama, an ally of Widodo, over allegations he insulted the Koran while campaigning for re-election.

The controversy led to Purnama’s downfall -- he lost the election and was jailed for blasphemy for two years this month over the claims -- and stoked concerns about rising religious intolerance in a country traditionally regarded as a bastion of tolerant Islam.

The FPI was long viewed as a marginal organisation whose extreme views did not reflect those of most Indonesians, and was known for raiding bars during Ramadan, but gained national prominence due to the protests.

Naming someone a suspect is a step in the Indonesian legal system which means authorities believe they have enough evidence to consider filing charges, and such cases normally go to court.

Shihab, who has been jailed twice before, could face up to five years in prison if found guilty.

“We will issue an arrest warrant and check his house and work with immigration to determine his whereabouts,” Argo said.

Shihab’s lawyer Sugito Amto Prawiro denied the cleric had broken the anti-porn laws and said he was the “victim of a cruel act”.

The woman who received the messages has also been named a suspect in the case. -AFP
Posted by wikisabah at 5:32:00 PM