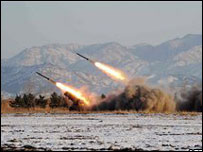 SEOUL (AFP) - North Korea launched a series of what appeared to be "surface-to-ship" cruise missiles on Thursday, South Korea's defence ministry said, in what would be the latest in a string of tests in defiance of UN sanctions.

"North Korea fired multiple unidentified projectiles, assumed to be surface-to-ship missiles, this morning from the vicinity of Wonsan, Gangwon Province," the ministry said.

Seoul has stepped up surveillance against possible threats, it added.

This would be the fourth missile test by the nuclear-armed regime in less than five weeks, as Pyongyang continues to defy UN warnings and US threats of possible military action.

The UN Security Council last Friday unanimously adopted a US-drafted resolution imposing new targeted sanctions on a handful of North Korean officials and entities, in response to a series of ballistic missile tests this year that are banned under UN resolutions.

However, North Korea on Sunday slammed the latest UN sanctions as "mean" and vowed to press ahead with its missile and nuclear weapons programmes.

Professor Yang Moo-Jin of the University of North Korean Studies told AFP: "North Korea has been stepping up missile tests ... in order to project an image to the world that international sanctions can never bring it to its knees.

"It is also expressing displeasure of the arrival of a US nuclear submarine in South Korean".

The 6,900-ton USS Cheyenne, whose home port is Pearl Harbor, arrived in the South Korea port of Busan Tuesday.

The US has stepped up its muscle-flexing in recent months in response to what it sees as aggressive shows of strength by North Korea.

Two US aircraft carriers and their escort vessels have carried out naval maneuvers in the Sea of Japan within the last two weeks in a show of force directed at Pyongyang, the US military has said.

Early last month, the North test-fired what appeared to be its longest-range ballistic missile to date, in a bid to bring the US mainland within reach.

The North has carried out two atomic tests and dozens of missile launches since the beginning of last year in its quest to develop a missile capable of delivering a nuclear warhead to the continental United States -- something President Donald Trump has vowed "won't happen".

The US military "successfully intercepted an intercontinental ballistic missile target" in a test conducted amid concerns over the North's weapons program, it said.

The North says it needs nuclear weapons to forestall the threat of a US attack.

China, the reclusive regime's sole major ally, has made it clear that a push for talks -- and not more sanctions -- is its priority.

But the US has said it is willing to enter into talks only if the North halts its missile and nuclear tests.

Many analysts doubt that the North has developed an ICBM or a nuclear warhead small enough to fit atop a missile.

But most agree that the country has made significant progress under the young leader, who took power after the death of his father and longtime ruler, Kim Jong-Il, in December 2011.
Posted by wikisabah at 10:55:00 AM