‘Perkasa’s call enough reason for Sabah to pull out’ 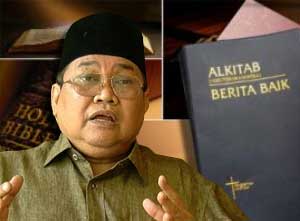 Why is Perkasa's Ibrahim Ali 'scot free' when he should have been arrested and charged a long time ago for uttering offensive and inflammatory words against Christians?

KOTA KINABALU: Perkasa’s call for Muslims to burn the Malay version of the Bible is the final straw for Christians in Sabah and could prove fatal for Barisan Nasional.

And the government’s implicit support for the firebrand, radical and racist NGO is opening up good reasons for Sabah and Sarawak to leave the federation, said State Reform Party (STAR) deputy chairman Daniel Jambun.

Jambun, in a statement today, said he was appalled by the weakness of the prime minister who is not even willing to flex his muscle to arrest, charge and punish Perkasa president Ibrahim Ali for for fanning racial and religious hatred in the country.

“The prime minister’s silence is opening good reasons for Sabah to secede from the federation because past assurance for us have been reneged and violated, and that we have long felt that we are no longer defended by our own laws, by our own leaders, even by some of our kings?,” he said.

Jambun said it’s not just the PM who needs to speak up against Perkasa but also several ministers who are responsible for national unity and harmony and national security, as well as the federal cabinet members from Sabah.

“But they are surprisingly very quiet about the anti-national offences that Perkasa has been committing.

“So what is the point of staying on in a federation that not only neglects you but also has an implicit policy to eliminate your rights?” Jambun asked.

He also pointed out that what Ibrahim had said “very clearly” contravened the Penal Code and Sedition Act.

“I agree with the lawyer Syahredzan Johan that Ibrahim needs to be stopped effectively with the laws immediately for possibly having committed several offences under sections 298 and 505 of the Penal Code.

“The lawyer is right that Section 298 states that it is an offence to utter words that deliberately wound religious feelings.

“If found guilty, an offender can be imprisoned for a year, or fined or both. Section 505 meanwhile states that it is an offence to make statements that are conducing public mischief.

Those found guilty under this section can be imprisoned for a span of two years, fined or both.”

He said that Ibrahim should have been arrested and charged a long time ago for having uttered many other highly offensive and inflammatory words against Christians before this.

“As such it makes us wonder why he is still scot-free. Why are the authorities giving him such special privileges of being a blatant violator of the laws and be subject to arrest?” he demanded.

He said the current situation with Ibrahim and Perkasa can only be interpreted as Malaysia practicing selective prosecution with many pro-Umno leaders being protected by the powers that be.

“This amounts to moral corruption, a glaring act of weaknesses and cowardice on the part of the prime minister which cannot be tolerated or forgiven,” Jambun said.

Jambun stressed that the Christians in Malaysia are now being harassed, insulted and attacked incessantly, and the frequency and intensity of these attacks are increasing to the point where it is difficult to practice Jesus’ commandment to “Love thy enemy” and forgive your brother “seven times seventy seven times”.

“Christians are now wondering how long more they can take it (this harassment) with dignity.

“Christians in Sabah are seething in anger, and reminding themselves that this is not what they asked for before joining Malaysia.

“In fact we have been assured of religious freedom and this was literally cast in stone, on the Keningau Oath Stone, which still stands as a lasting testimony to the sincerity of the nation’s earlier leaders, including Najib’s father, Tun Abdul Razak.
Posted by wikisabah at 4:54:00 PM