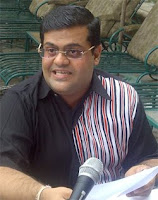 The Umno-backed sex video being circulated to blacken Anwar Ibrahim was made 15 years ago when Anwar was still deputy prime minister according to carpet dealer Deepak Jaikishan, the man accused by Raja Petra Kamarudin to be the “bagman” to Rosmah Majid, wife of the prime minister, and said to be the man who fixed up private investigator P Balasubramaniam in the Altantuya Shaariibuu case.


“Deepak disputes that the video was shot in February 2011. It is an old video of 15 years ago, explains Deepak. That is why Anwar looks younger and better built in the video, argues Deepak.

But [Rosman] is not too sure that she needs Deepak’s help to bury Anwar. Deepak might also to bury her alongside Anwar as he has been telling everyone very nasty things about her. Deepak had said that Najib Tun Razak would fall by July 2011, according to an astrologer’s prediction, and Deepak claimed that he has enough evidence to guarantee Najib’s downfall.

However, Raja Petra said, Deepak was no longer in Rosmah’s good books: she had “dropped him like a hot potato” because of so much bad publicity about him. He was now trying to get back into her good books because of problems with a loan from Kuwait Finance House, said Raja Petra. He said Deepak was also involved in paying “kickbacks” to some officers of the bank.

Raja Petra said Deepak was trying to win Rosmah’s favours by bringing P.I. Balasubramaniam back to Malaysia to sign another fourth statutory declaration absolving the Prime Minister and his wife of any involvement in the murder of Altantuya Shaariibuu, then Rosmah might take him back into her circles.

“But Deepak has blundered big time, the mother of all blunders. He has also been going around bad mouthing the First Lady. He has said many nasty things about her and this, of course, has reached her ears. So she is pissed big time. And when Rosmah Mansor is pissed she is really pissed. What is that they say about a woman scorned?” said Raja Petra.
Posted by wikisabah at 12:34:00 AM