A new plan for all, or still just the cronies? 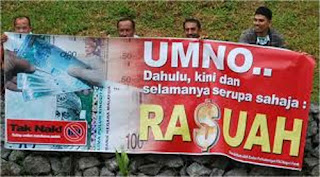 The party never ends for Umnoputras. Never. It is one continuous gorge at the buffet table, funded by Malaysian taxpayers.

Sure, it is couched in the language of a national agenda; to help Malaysia achieve the target of becoming a developed nation by 2020; to help Malays obtain jobs, houses and narrow the wealth gap between have and have-nots. Blah, blah, blah.

But make no mistake, the only people who will be celebrating the Najib administration's latest stab at affirmative action will be his Cabinet ministers, deputy ministers, senators and their family members and business partners.

Whenever the government splashes money on programmes and projects, it is the rich and connected who benefit most. The rest feed on scraps.

The New Economic Policy made millionaires of some pretty pedestrian Umno politicians and their cronies. The continuation of the NEP under the name of the National Development Policy turned the millionaires into multi-millionaires and we can be sure that the RM9.2 billion to be spent by Datuk Seri Najib Razak under the latest Malay-only initiative will make the plunderers into the super-rich class.

Yes, some Malays will be able to own houses under the affordable housing scheme but the interest-free loan or subsidised repayment scheme will be nothing compared to the obscene profits the politician and his property developer nominee will make from taking part in the housing project.

Similarly, some Malay graduates will become more employable after attending a crash course in English but their happiness will be outdone by the select few who will make millions from delivering the training modules and building training facilities.

There are so many things wrong about the government's decision to reward its loyal voters and constituents with this new Malay agenda.

One, the funds to be used by Najib and gang are from all taxpayers, not from the Umno endowment fund or from the annual Perkasa subscription. Chinese, Indians, Punjabis and others pay taxes and are entitled to reap the benefits when taxpayer funds are used for government projects.

It is dishonest for the government to say that non-Malays will not lose out under this new affirmative action programme. Of course, they will. You are essentially taking what Samy and Chua contributed into the common pool and only rewarding Abdul.

Two, the affirmative action plan for Malays and Bumiputeras assumes wrongly that Chinese and Indians and Punjabis and Eurasians are all living in the lap of luxury.

Just take a stroll around Kampung Medan on the outskirts of Kuala Lumpur and you will find Indians in abject poverty.

Go into Salak South and Jinjang and you will find Chinese families struggling to make ends meet.

Three, mediocrity should never be rewarded or excused so easily. And this is what the government is doing by cobbling together another Bumiputera-first policy.

Let us take the issue of making Malays employable. Who dumbed down the education system? Who threw out English as the medium of instruction?

Who chose the easy path and set up more universities, turning tertiary institutions into nothing more than degree mills? Who scrapped the policy of teaching Maths and Science in English?

And now, after a catalogue of mistakes and mediocre decisions, the government says it has a problem on its hands: Malay graduates who are unemployable. The troubling fact: the government that put the Malay community in this mess is now saying it has got the silver bullet.

Nothing irks intelligent people more than when government practises deceit. Yesterday was all about loading up the gravy train for the Umnoputras once again.

Collected from Msia Insider
Posted by wikisabah at 4:52:00 PM