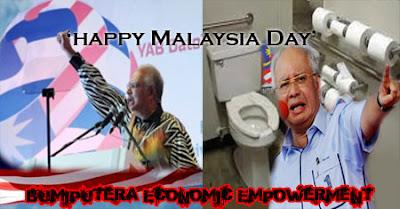 Najib Abdul Razak who had touted himself as a prime minister for all, appears to have morphed into a threat to national unity, warns PKR vice president N Surendran.

This, he said in a statement today, became apparent after the premier announced a raft of race-based economic measures dubbed the ‘Bumiputera Economic Empowerment' plan.

Describing this as the "worst Malaysia Day present", Surendran warned that Najib and his ruling coalition were threatening to set back the country's development and encouraging racial division and disharmony.

"Najib and Umno/BN have become a positive danger to the unity, peace and prosperity of this country.

"They have recklessly embarked on this plan for the narrow political agenda of Umno/BN," he said.

Elaborating on the legal aspect of the new race-based policies, Surendran who is a lawyer by training, said the measures were discriminatory and against the law.

"Article 153 of the federal constitution which allows very specific and limited quotas for bumiputeras, does not permit wide-ranging race-based economic discrimination as set out in this new plan.

"The Bumiputera Economic Empowerment plan thus falls foul of Article 8 of the Federal Constitution and is blatantly discriminatory.

"Nothing in the constitution allows the government to set up massive funds, share schemes, housing developments and contracts, for the benefit of one race only," said PKR vice president N Surendran in a statement today.

He said the massive plan unveiled yesterday worth at the very least RM30 billion, which the PM unabashedly indicated was in response to the strong Malay support during the last general election, "reeks of massive immorality" and breached international human rights standards.

"This is nothing short of punishment of non-Malays for voting opposition, and an attempt at large-scale political bribery of the Malay community.

"The object of the Bumiputra Economic Empowerment plan is thus completely illegal, racist and criminal in nature," concluded the Padang Serai MP.
Posted by wikisabah at 3:50:00 PM