Italy declares state of emergency in region hit by earthquake, death toll at 267 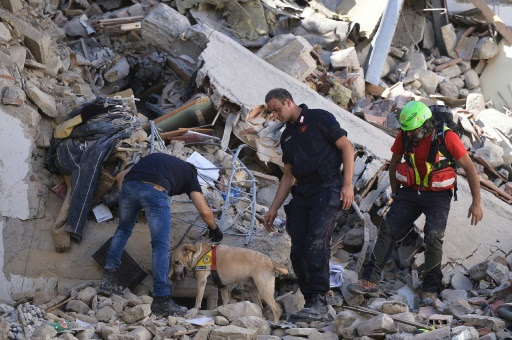 A 4.7-magnitude aftershock has hit the Italian town of Amatrice as rescuers and emergency teams continue their search of three flattened hilltop towns and Italy declares a state of emergency in the region.

With the provisional death toll from Wednesday’s 6.2-magnitude quake standing at 267, including several foreigners, the Italian prime minister, Matteo Renzi, authorised a preliminary €50m (£43m) in emergency funding for the stricken zone.

The powerful aftershock, the latest of more than 500 since the initial quake, hit the area shortly after dawn on Friday, sending up plumes of thick grey dust, shaking buildings that were still standing and fuelling fears of fresh collapses which could hamper the rescue operation.

In a first raft of emergency relief measures, Renzi cancelled residents’ taxes in and around the hardest-hit towns of Amatrice, Accumoli, Arquata del Tronto and Pescara del Tronto, between 60 and 90 miles (95-145km) north-east of Rome.

The UK foreign secretary, Boris Johnson, said on Thursday that a number of Britons had been affected by the earthquake and extra staff had been sent to the region. Two Romanians, a Canadian, a Spaniard and a Salvadoran were also killed.

Most of the confirmed deaths were in Amatrice, where 193 people had died, including three Britons: two thought to have owned an apartment in a village outside the town and a teenage boy.

The 2,500-strong population of the medieval hilltop town, voted one of Italy’s most beautiful historic towns last year, was swollen with summer visitors, many from Rome, in anticipation of its popular annual food festival this weekend.

But while 215 people had been pulled alive from the rubble since Wednesday and more than 360 were being treated in hospital, questions were mounting as to why there had been so many deaths in an area known for decades to be the most seismically hazardous in Europe.

After a 2009 earthquake in nearby L’Aquila left 300 people dead, authorities released €1bn to upgrade buildings in the region, but takeup has been low. Despite eight devastating earthquakes in 40 years, experts estimate 70% of Italy’s buildings do not meet seismic standards.

“Here, in the middle of a seismic zone, nothing has ever been done,” Dario Nanni, of Italy’s architects’ council, told Agence France-Presse. “It does not cost that much more when renovating a building to make it comply with earthquake standards. But less than 20% of buildings do.”

The culture minister said 293 historical buildings had been damaged or destroyed by the quake and public prosecutors announced an investigation into whether anyone could be held responsible.

Meanwhile, Renzi announced plans to help the country prepare better and address poor building standards, saying Italy should “have a plan that is not just limited to the management of emergency situations”.

But the prime minister said suggestions that the country could easily construct quake-proof buildings were “absurd”. It was difficult to imagine, he said after a cabinet meeting, that the level of destruction from Wednesday’s quake “could have been avoided simply by using different building technology. We’re talking about medieval-era towns.”

In Amatrice and the surrounding small towns and villages hopes of finding more survivors were fading; no one had been recovered alive since Wednesday night. The focus was now on helping the more than 1,200 people left homeless.

About 5,400 emergency workers, firefighters, soldiers and volunteers, helped by 50 sniffer dogs, continued to sift through piles of cement, rock and twisted metal, many pointing out that the last survivor from the L’Aquila quake was found 72 hours after it struck.

“We will work relentlessly until the last person is found, and make sure no one is trapped,” said one rescue team spokesman, Lorenzo Botti.

Some survivors, having slept in their cars or in tent cities set up outside the towns, were allowed to pick up essential items from their homes on Thursday accompanied by rescue workers.

“Last night we slept in the car. Tonight, I don’t know,” said Nello Caffini, carrying his sister-in-law’s belongings on his head through Pescara del Tronto, which was almost completely destroyed.

Italy’s older buildings are not obliged to conform to anti-seismic building codes, and experts estimate it could cost more than €90bn to reinforce all the country’s historic buildings. Targeted improvement work, though, could be effective.

Compounding the problem is the fact that many more modern buildings do not comply with regulations when they are built, and often prove deadlier than older constructions when an earthquake strikes.

News reports in Amatrice said investigators were looking in particular into the town’s Romolo Capranica school, which was restored in 2012 using funds provided after the L’Aquila quake. It all but collapsed on Wednesday, while the town’s 13th-century clock tower remained standing.

“We are able to prevent all these deaths,” Armando Zambrano, of the national council of engineers, told the Associated Press. “The problem is actually doing it. These tragedies keep happening because we don’t intervene. After each tragedy we say we will act but then the weeks go by and nothing happens.”
Posted by wikisabah at 5:14:00 PM