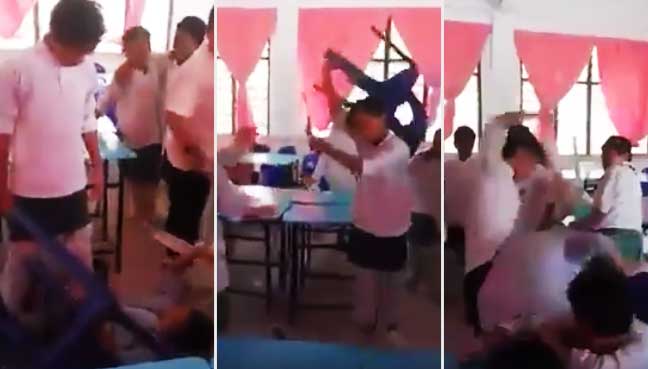 PUTATAN - Police will call all the individuals in the video clip showing a primary six student allegedly bullying his schoolmate at a religious school after the end of the Ujian Pernilaian Sekolah Rendah (UPSR) examination.

Penampang police chief DSP Rosley Hobden said this was to ensure the students would not miss their mid-term examination.

“We do not want them to be distracted from their exam. We will talk to the students by the end of this week once they finish their exam paper,” he said yesterday.

Rosley was commenting on the video clip, which has gone viral in social media, showing a primary six student allegedly bullying his schoolmate by hitting his victim with a chair, as well as punching and grabbing his victim’s neck at a religious school in Putatan last month.

The two-minute-and-28-second video clip was believed taken on August 30.

Rosley also said that police had taken statements from the school headmaster and teachers who were on duty when the incident happened.

The case would be investigated Section 324 of the Penal Code for voluntarily causing hurt, he said.

“We will carry out a comprehensive investigation relating to this incident.

“Based on information we received, the incident took place during school recess after the teacher on duty had left the classroom.

“We also have to wait until the UPSR exam is over before we can carry out a thorough investigation, as the students are currently sitting for their exam,” he said yesterday.

Assistant Minister to the Chief Minister, Datuk Mohd Arifin Arif Mohd said he had visited the religious school, together with Jheains and the State Education Department, pertaining to the incident.

“This incident involved primary six students and we are still conducting a thorough investigation to find out what actually happened.

“Both Jheains and the State Education Department will find a short and long-term solution to prevent such an incident from happening in the future.

“We may have to review the procedure or schools regulation to enable the school management to monitor their students’ activities,” he said.
Posted by wikisabah at 4:19:00 PM