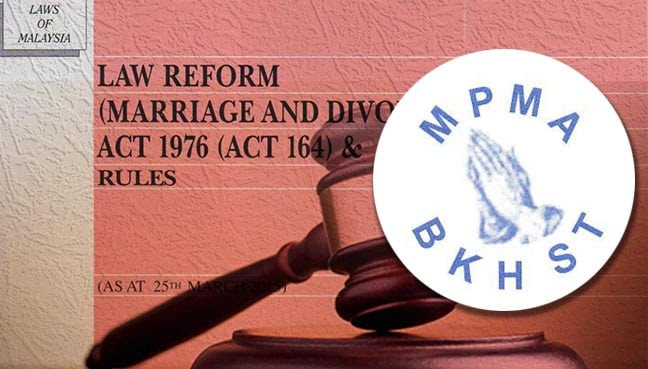 Its honorary secretary, Prematilaka Serisena, says the proposed draft, expected to be tabled at the Cabinet meeting, should be put on hold until the government consults all stakeholders.

PETALING JAYA - A non-Muslim interfaith group says it has not seen nor agreed to the government’s proposed Law Reform (Marriage and Divorce) Act 1976.

Malaysian Consultative Council of Buddhism, Christianity, Hinduism, Sikhism and Taoism (MCCBCHST) Honorary Secretary Prematilaka Serisena said as such it was unable to give any opinion on the proposed act.

“We want to clarify that we have heard rumours that we (MCCBCHST) have already agreed to the proposed draft.

“Until now, we haven’t been consulted. As such we cannot consent to any changes. The government should consult all stakeholders,” he told FMT.

The MCCBCHST, however, had earlier proposed four changes to the Act, he revealed.

The first two are to ensure the civil courts have jurisdiction to grant a divorce in a civil marriage.
It wants to amend the word “parent” in Article 12 (4) of the Federal Constitution to “parents” so that a child’s conversion has the consent of both parents, instead of just one.

The association also wants the civil courts, and not the Islamic courts, to be given preference during a petition for divorce in civil marriages.

It also wants it to be compulsory for the spouse to give seven days’ notice before any conversion.
Prematilika said amendments to the Law Reform Act would fail if it does not address unilateral conversions.

He cited the custody battles of two Hindu mothers, S Deepa and M Indira Gandhi, following the unilateral conversion of their children by their ex-husbands who converted to Islam.

In both cases, their husbands had snatched the children away from their mothers.

After a long-drawn court battle, the Federal Court subsequently awarded custody of Deepa’s son to the father.

In Indira’s case, her ex-husband has yet to comply with the civil court order to award the custody of their youngest daughter to the mother.

The amendments to the act would provide an opportunity for both partners to resolve the issue of civil marriage in the civil courts, thus enabling them to continue their life like other couples to marry non-Muslims.

Najib also said it would remove the clash between the civil court and shariah court, arising from conversion to Islam by one of the spouses. Legislative gaps and duplication of provisions within the existing law may also be resolved.
Posted by wikisabah at 6:28:00 PM