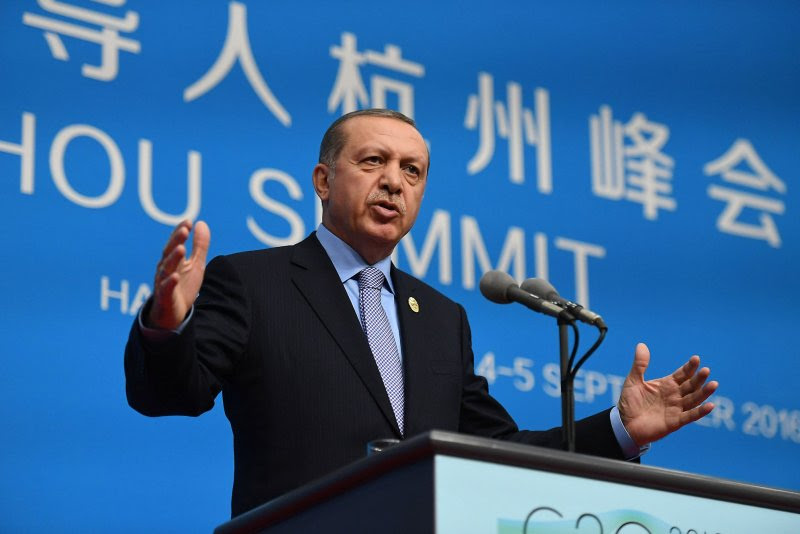 Also Sunday, the Interior Ministry removed 28 mayors from office on charges of supporting terrorism and appointed local trustees to replace them. The mayors, mainly in the southeast, were linked to the July 15 attempted coup, the ministry said.

According to an emergency decree, the government can replace mayors and city council members who "have been actively engaged in acts of terrorism and openly providing support to terrorism," an Interior Ministry statement said.

In a televised message, Erdogan said it's necessary to "render it [terrorists] unable to carry out activities in Turkey."

Last month, Turkey launched an offensive to remove the Islamic State from Syria's northern border region. He called that a "first step" in the fight against the Islamic State, which he calls Daesh.

He also said Turkey would defeated the outlawed Kurdish Workers' Party, or PKK, and the Feto group of U.S.-based cleric Fethullah Gulen.

He said the Feto group was behind the July 15 attempted coup and the PKK/Democratic Union Party in Syria would be stopped like the PKK in Turkey.

"We are determined to wipe out the PKK trouble from Turkey together with our security forces," he said. "Just like Feto, the PKK stands no change against our sagacious people and the power of our state."

Turkey's government has said the failed coup, which left 240 people dead, was organized by followers of Gulen, who lives in self-imposed exile in the Saylorsburg, Pa., and by his social service organizations in Turkey, which the Turkish governmenthas together labeled the "Fetullah Terrorist Organization." Turkey has been negotiating with the United States on his extradition.

A 10-day truce is due to start in Syria on Monday, according to an agreement announced early Saturday by the United States and Russia.

Clashes broke out in parts of southeastern Turkey after the mayors in mainly Kurdish towns were removed by new Interior Minister Suleyman Soylu. About 200 people were dispersed by tear gas and water cannon outside the city hall in Suruc, the private Dogan news agency reported.

Turkey's Anadolu Agency said that 24 were are suspected of links to the Kurdistan Workers' Party and four are thought to be linked to Gulen.

"Mayors and town councillors, who come to power through elections, must perform their duties according to the law," Justice Minister Bekir Bozdag said. "If [they] finance terrorism by transferring public funds allocated to them to serve the people, and allow the use of municipal vehicles, equipment and capabilities in terrorist activities, they lose their democratic legitimacy,"

The Kurdish Peoples' Democratic Party, whose mayors were principally affected, condemned the move as "coup by trustees."

"This unlawful and arbitrary action will only deepen the existing problems in Kurdish towns and cause the Kurdish issue to be even more unsolvable," it said.

The United States embassy in Ankara expressed concern over the government's actions, saying in a statement "we note the importance of respect for judicial due process and individual rights, including the right of peaceful political expression, as enshrined in the Turkish Constitution. We hope that any appointment of trustees will be temporary and that local citizens will soon be permitted to choose new local officials in accordance with Turkish law."