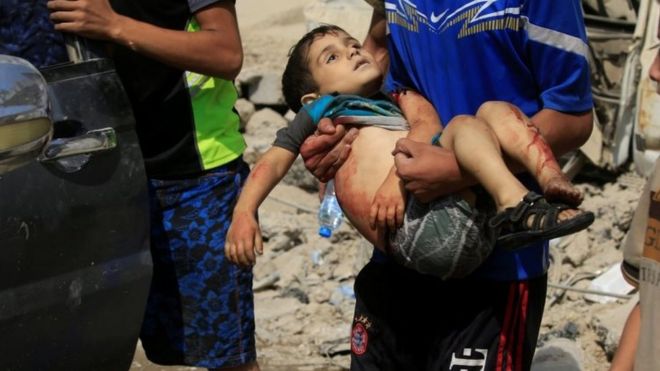 Dozens of civilians have been killed in Mosul while fleeing a district held by so-called Islamic State (IS) in the Iraqi city, reports say.

A Reuters TV crew found the bodies of men, women and children laying in a street in the Zanjili district.

It is not clear how exactly the civilians were killed. A US aid worker was quoted as saying that IS had been shooting people trying to escape.

The Iraqi army began a major offensive to take back Mosul in October.

It is being supported by air and ground strikes from a US-led coalition.

The Iraqi authorities have so far made no public comments on the latest reports.

The Reuters TV crew reported seeing dead bodies laying on Saturday in Zanjili - one of three frontline districts still in the hands of IS.

"Over the past two days ISIS (Islamic State) has been shooting people escaping this area," Dave Eubank from the Free Burma Rangers relief association told the news agency.

"I saw over 50 dead bodies yesterday (Friday), we worked with the Americans to get smoke and an Iraqi tank, and followed behind them and we rescued one little girl and one man. But there are still more," he said.

Some of those trying to escape have reportedly been injured in a coalition air strikes targeting IS fighters.

Hundreds of other civilians - some wounded and some carrying apparently dead bodies wrapped in blankets - had managed to reach the government lines, Reuters reported.

IS militants want to keep civilians around them - making it harder for the advancing government troops to pick out and target the gunmen.

Local people have been extremely vulnerable as the attacking government forces and their US-led coalition allies have closed in.

In March, the US military acknowledged that aircraft of the coalition fighting IS hit a location in west Mosul where dozens of civilians were reportedly killed.

The northern Iraqi city of Mosul fell to IS in 2014 and is its last major urban stronghold in Iraq.

Pro-government forces took full control of the eastern half of Mosul in January and started an assault on the west the following month.

Fewer than a few hundred militants are now believed to be besieged in north-western districts, including the Old City, along with as many as 450,000 civilians.

More than 580,000 civilians have fled the city since the operation to recapture it began, according to the Iraqi government.

Most have taken refuge in nearby camps and reception centres. Others have gone to stay with relatives and friends.

There is also deep concern for the thousands of people who remain in western Mosul. Food supplies are very low and clean drinking water is in very short supply.

The UN said in late January that almost half of all the casualties in Mosul were civilians. At least 2,014 have been killed and 1,516 injured across Nineveh province since the start of October.

Iraq's military does not release casualty figures, but a US general said at the end of March that 774 Iraqi security personnel had been killed and 4,600 wounded. - BBC
Posted by wikisabah at 12:57:00 PM