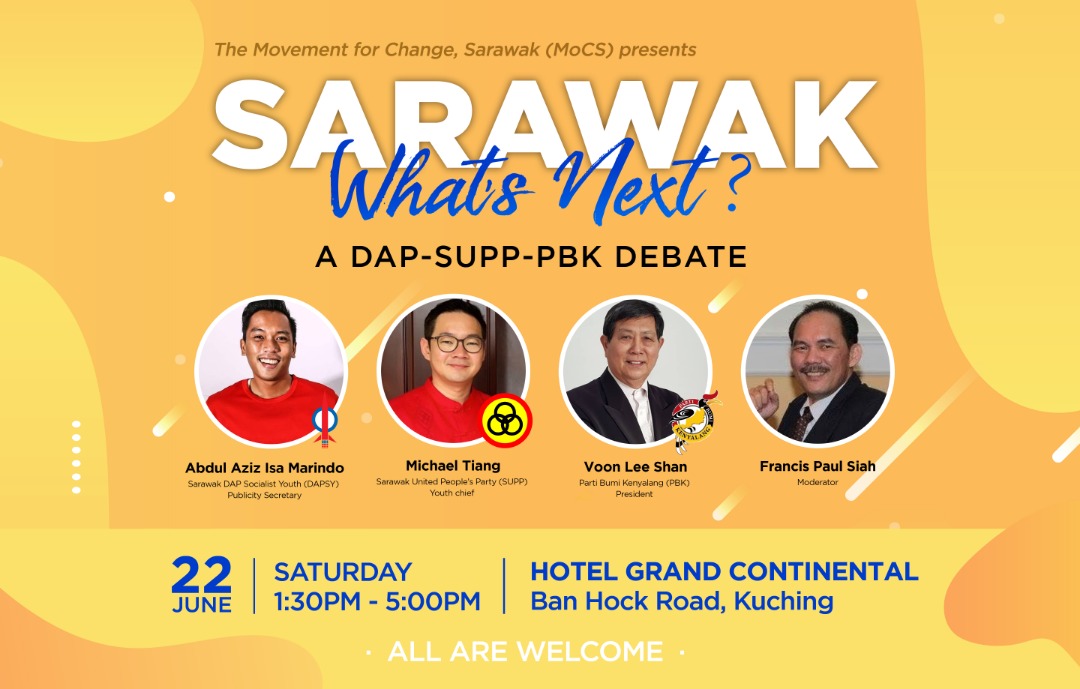 KUCHING - Arguments on whether or not Sarawak should seek independence from the Federation of Malaysia were the central theme during the ‘Sarawak, What’s Next?’ debate, conducted by Movement of Change, Sarawak (MoCS) here yesterday.

PBK president Voon Lee Shan appeared the most eager in advocating for the independence movement, as he pointed out that Sarawak had been at a disadvantage ever since the formation of Malaysia in 1963.

“In order to secure more revenues for the state, the only way to do it is through the independence of Sarawak. This is the key to everything,” said Voon during a segment of the debate, which took place at a hotel along Jalan Ban Hock.

Voon regarded seeking independence for Sarawak as ‘the magic bullet’ that could solve all issues plaguing the country such as the epidemic of corruption, extremism, religious fanaticism and problems affecting the Native Customary Rights (NCR) land.

In his argument, SUPP Youth secretary-general Milton Foo said a timeframe should be set on the negotiations with the federal government regarding the restoration of Sarawak’s rights and status within Malaysia.

“If within that timeframe, we could not achieve what we wanted, I would dare to say – in my own capacity – that leaving the Federation (of Malaysia) would be the right move,” he said.

Foo took over from SUPP Youth chief Michael Tiang, who had to cancel his participation in the debate at the last minute due to some urgent personal matters.

Adding on, Voon said assistance should be sought from the United Nations (UN) in addressing the ‘wrongs’ that had been committed, all for the best interest of Sarawak.

Moreover, he said such matters should be raised in the UN Assembly.

“We want the UN to hear our voices. We have the cause and the right to bring the matter to UN,” said Voon, who also expressed his hope for the Malaysia Agreement 1963 (MA63) to be ‘declared null and void’.

Back to Foo, he opined that Sarawak had been treated unfairly by the federal government as the state resources had been redirected to fund major projects in other states across Malaysia.

“We cannot allow Peninsular Malaysia to prosper at the expense of the Borneo states of Sabah and Sarawak,” said Foo.

In his remarks, DAP Socialist Youth (Dapsy) Sarawak publicity secretary Abdul Aziz Isa saw Sarawak as having a better prospect ever since the Pakatan Harapan (PH) took over the helm of the federal government last year.

He stressed that the right way to restore the rightful status of Sarawak should be via Parliament, especially in view of the institutional reforms ‘being in full swing’ under the PH-led federal government.

“Before you talk about independence, what has the state government done to (utilise) the land?” he questioned, citing problems affecting NCR land as ‘a clear example’ that the government had not managed Sarawak well.

Adding on, Abdul Aziz expressed his concern about the outcome of Sarawak being declared independent from Malaysia, given the widespread abuse of power on state resources.

Moreover, he warned Voon that the latter’s proposition on MA63 to be declared null and void, could ‘open a floodgate to a constitution crisis’.

Back on Foo, he stressed that public support towards the administration of Sarawak government under Gabungan Parti Sarawak (GPS) was crucial, as far as the leaders’ struggles in fighting for Sarawak was concerned.

Asked whether or not SUPP would support an amendment Bill in relation to Article 1 (2) of the Federal Constitution should it be tabled again, Foo said words of ‘pursuant to the Malaysia Agreement 1963’ should be included in the Bill to reflect the original spirit of Sarawak coming together to form Malaysia.

During the last parliamentary sitting, a Bill to amend Article 1(2) of the Federal Constitution meant to seek for restoration of Sarawak’s rights, failed to obtain the two-thirds majority in Parliament on April 9 this year, as the MPS from GPS, Barisan Nasional (BN) and Parti Islam Se-Malaysia (PAS) abstained from voting.

“If the Bill would be tabled again with the inclusion of the words ‘pursuant to the Malaysian Agreement 1963’, I would support the Bill. And if my party did not support the Bill, I would quit my part,” said Foo.

Generally, all representatives of the three political parties agreed that the there was no right or wrong in politics as the aspiration of seeing development and better living standards of the people of Sarawak would remain the ultimate goal, regardless of political affiliation.