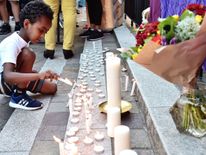 Devastated families and neighbours today gathered to light candles at a vigil in the wake of the Grenfell Tower tragedy.

At least 12 people are confirmed to have died and many more of the block’s hundreds of residents are unaccounted for following the huge fire that raged through the west London block overnight.

Heartbreaking photos from the evening service outside Notting Hill Methodist Church show many people moved to tears after a moment of silent contemplation on the horror.

The Rev Mike Long invited those present to light candles before playing Amazing Grace on his flute as members of the crowd sang along.

He said: "There are times when all the words we can say are not adequate and sometimes words fail us because no words can do justice to how we feel, or what we have seen or what has happened. Today is one of those days.

"What we can simply do is look to all that we have seen today which is good, which is fabulous - people getting together."

He added: "Let light triumph over all that is rotten, that is desperate and that defies our understanding."

Police expect the death toll to rise as they continue to search the upper floors of the building.

The fire is thought to have started on the third or fourth floor shortly before 1am before destroying flat after flat.

Witnesses described seeing people leap for their lives while others, trapped inside, tried to signal for help. A baby was reportedly saved from the burning building after being thrown and then caught by a member of the public several storeys below.
Posted by wikisabah at 1:24:00 PM