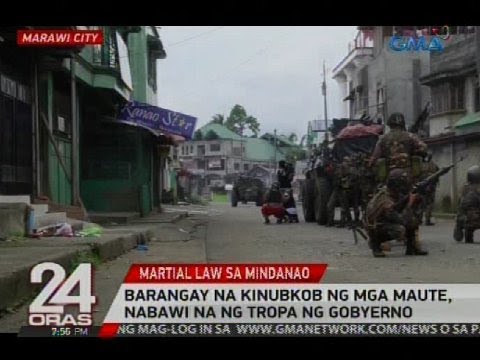 MARAWI - Maute fighters are now holed up in only 4 barangays in Marawi City, a military spokesperson said on Wednesday, as fighting in the city entered its fourth week.

Brig. Gen. Restituto Padilla, spokesperson of the Armed Forces of the Philippines, said the military now has "a better set of information" with the help of American troops' technical assistance, giving them "a good degree of advantage over the enemy."

"Out of the 96 barangays when we started this incident, there are only 4 barangays now that remain as problematic areas, and these barangays are not the whole barangays anymore," he told ANC's Headstart.

He refused to name the barangays for security purposes, only saying that the villages "continue to have areas of resistance."

"They are dwindling; this resistance is getting lesser and lesser by the day that’s why we are getting into the inner streets and inner areas," he added.

Marawi is "blocked off," according to Padilla and he assured that the tunnels the military have discovered in houses were mostly "survival or storage areas for houses" which were built after a siege in the city in the early 1970s.

"We have yet to see areas that are connected. In the course of time, we may be able to find out, but right now the discoveries that we have been having are exactly that—only for purposes of houses," he said.

The seizure of Marawi has alarmed Southeast Asian nations which fear Islamic State - on a backfoot in Iraq and Syria - is trying to set up a stronghold on Mindanao that could threaten their region.

Almost the entire population of about 200,000 fled after the militants tried to overrun it, but the military believes that beyond the checkpoints now fencing off its main roads there are still some 300-600 civilians trapped or being held hostage.

Padilla earlier said about 100 militants were still fighting, down from the estimated 400-500 who stormed the town. With Reuters
Posted by wikisabah at 4:16:00 PM