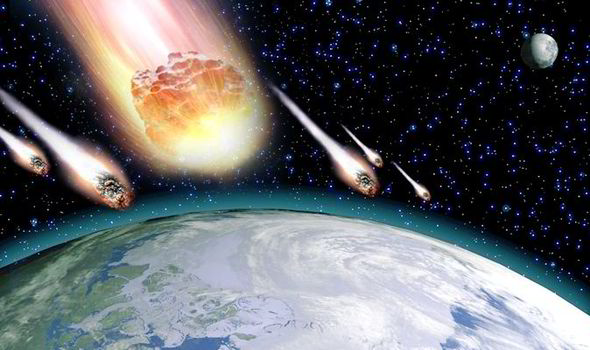 There are 10 asteroids NASA has classified as "potentially hazardous" based on their size and their orbits in our Solar system. NASA has now identified 693 near-Earth objects, thanks to the Wide-field Infrared Survey Explorer spacecraft that's been looking for potential threats to Earth since 2013.

The organisation doesn't specify what kind of hazard these 10 asteroids pose. But Earth has been hit by objects in the past, with devastating effects.

Scientists largely agree it was an asteroid or comet impact that started the chain of events that wiped out the dinosaurs about 60 million years ago. Every year, several previously unseen asteroids whizz past Earth, sometimes with only a few days' warning.

This year, two of these asteroids came very close to Earth, with one in May sailing past only 15,000 kilometres away. On cosmic scales, that was a very close shave.

But impacts from objects in space are just one of several ways humanity and most of life on Earth could suddenly disappear.

We are already observing extinctions are happening now at an unprecedented rate.

In 2014 it was estimated the extinction rate was 1,000 times greater than before humans were on the Earth.

The estimated number of extinctions ranges from 200 to 2,000 species per year.

From all of this very worrying data, it would not be a stretch to say we are currently within a doomsday scenario. Of course, the "day" is longer than 24 hours but may be instead in the order of a century or two.

So what can we do about this potential prospect of impending doom? We can try to avoid some of the likely scenarios.

We should act to tackle climate change and we can develop new asteroid-tracking systems and put in place a means to deflect an asteroid on a collision course with Earth.

But the threats we face are so unpredictable we need to have a backup plan.

We need to plan for the time after our doomsday and think about how a post-apocalyptic Earth may recover and humanity will flourish again.

Some efforts to back up life on our planet have already started.

Since the 1970s, scientists around the world began to store seeds of potentially endangered plants.

There are now dozens of seed banks or vaults scattered around the world.

The most famous is the Svalbard Global Seed Vault, located on a remote Norwegian island about 1,300 kilometres from the North Pole.

The location was deliberately chosen to afford the project safe and secure long-term storage in cold and dry rock vaults. But there were reports earlier this year the vault had suffered issues with water from the surrounding melting permafrost (caused by global warming) gaining entry to parts of the structure.

Less common are vaults for storing biological material from animals.

There are a handful of so-called frozen zoos around the world.

So far, sperm, eggs and embryos that have been frozen for roughly 20 years have been shown to be viable.

All of the storage methods that involve freezing have the same problem: that the material is at risk of thawing out if the freezing methods fail. Storing frozen biological material for centuries or even millennia on Earth is not realistic.

Humans can now sequence a whole genome of a living organism and the cost has reduced to the point where it costs less than $US1,000 to sequence the human genome.

This process effectively turns the information from any organism's cells into data.

Where to store the backups?

But where should humanity store the backups?

As French president Emmanuel Macron said recently, "There is no plan B because there is no planet B", echoing 2014 comments from Ban Ki-moon when he was secretary-general of the United Nations.

Backing up on Earth seems a high-risk strategy, equivalent to having a computer backup on an external hard drive that sits right next to your computer.

So given the motivation for backing up Earth's organisms is the likelihood of Earth itself suffering a catastrophe, it follows our planet is not the best location for the backups.

The partial flooding of the Svalbard Global Seed Vault illustrates that perfectly.

Perhaps the obvious place to locate the backups is in space. Seeds have already been taken to space for short periods (six months) to test their viability back on Earth. These experiments so far have been motivated by the desire to eventually grow plants in space itself, on space stations, or on Mars.

Space is a harsh environment for biological material, where cells are exposed to potentially very high doses of radiation that will damage DNA.

Storage of seeds in low Earth orbit is desirable as Earth's magnetic field provides some protection from space radiation.

Storage outside of this zone and in deep space would require other methods of radiation protection.

The other question is how you would get seeds and other biological material safely back to Earth after a global disaster.

Now we get to the robotics that can help, as autonomous re-entry of biological material from orbit is totally feasible.

The tricky part is for our orbiting bio-backup to know when its cargo is required and where to send it to.

Perhaps we need a global limited robot crew — such as David in the recent Alien films — that would wake up the orbiter when it is needed. Alternatively, it could be staffed by a rotating crew of wardens similar to the International Space Station.

These people could carry out other important scientific work too.

Other locations in space for storage of biological material or data include the Moon, the moons of our solar system's gas planets, asteroids or deep space itself on free-flying spacecraft. Such projects have been proposed and groups around the world have begun planning such ventures.

So it seems some people have already accepted the fate of humanity version 1.0 and that it will end sometime in the relative near term.

The movement to create our backup ready for humanity version 2.0 has already begun.