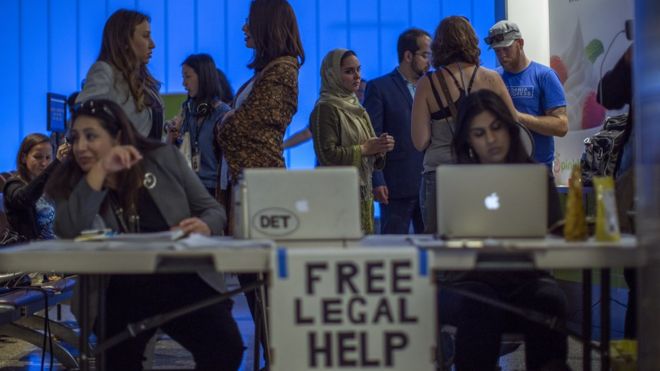 It means people without "close" family or business relationships in the US could be denied visas and barred entry.

But the judges provided a major exception, for those who have "a credible claim of a bona fide relationship" with someone in the US.

The effect is that citizens of the affected countries with a close relative in the US, such as a spouse, parent, child or sibling, will potentially be allowed in.

In a last minute change, the Trump administration extended the definition of close family to include fiancés.

However grandparents, aunts, uncles, nephews and nieces are not considered to be "bona fide" relations.

The rules apply to people from Iran, Libya, Syria, Somalia, Sudan and Yemen, as well as to all refugees.

Moments before the ban began at 20:00 Washington time (00:00 GMT), it emerged that the state of Hawaii had asked a federal judge for clarification.

Hawaii's attorney general has argued that the definition of "close family" is too narrow and may improperly prevent people from travelling to the US.

The American Civil Liberties Union (ACLU) said it would be closely monitoring the guidance and implementation of the order.

An official with the Department of Homeland Security said it expected "business as usual at ports of entry", adding: "Our people are well prepared for this."

Immigration rights activists and lawyers said they would be on hand at major US airports ready to help arrivals and ensure those with valid visas were allowed in.

The Supreme Court is expected to make a final decision on the ban in October.

Who can come in?

According to the new rules, for the next 90 days those from the six countries without a close relationship will not be able to enter the US.

IN - a parent, spouse, fiancé, child, son- or daughter-in-law, or sibling, including step- or half-siblings.

OUT - grandparents, aunts, uncles, nieces, nephews, in-laws, extended family and grandchildren.
Also exempt from the new rules are those with business or educational ties to the US.

However, the guidelines specifically state that the relationship must be formal, documented and not formed for the purpose of evading the order.

Those who already hold valid visas are not affected. Dual nationals who travel on their passport from the unaffected country will also be allowed entry.

The court also approved a 120-day ban on refugees entering the US, allowing the government to bar entry to refugee claimants who cannot prove the same ties to an American individual or entity.

What has the reaction been?

After the Supreme Court ruling:

Attorney General Jeff Sessions said "the threat to our national security is real and becoming increasingly dangerous". He said the ruling was "an important step towards restoring the separation of powers between the branches of the federal government"

Omar Jadwat, director of the American Civil Liberties Union Immigrants' Rights Project, said that "in practical terms most of the people who stood to be affected by the ban will still be allowed to come in"

David Miliband, president of the International Rescue Committee (IRC), said "the court's decision threatens damage to vulnerable people waiting to come to the US: people with urgent medical conditions blocked, innocent people left adrift, all of whom have been extensively vetted"

How did we get here?

The US president insisted his ban was necessary for national security and pointed to terrorist attacks in Paris, London, Brussels and Berlin as evidence.

However, critics called the policy un-American and Islamophobic, and that this ban would not have stopped atrocities in the US perpetrated by American-born attackers.

It included Iraq among nations whose travellers would be barred from the US, and imposed a full ban on refugees from Syria.

The president issued a revised version with a narrower scope on 6 March to overcome some of the legal problems.

The policy was left in limbo after it was struck down by federal judges in Hawaii and Maryland.
Posted by wikisabah at 2:42:00 PM