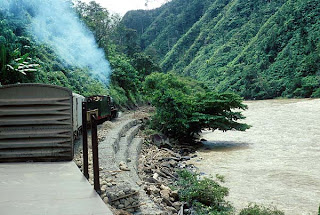 TENOM: Sabah State Railways (JKNS) have been urged to repair the damaged level crossing gate located near the Tenom bridge.

The level crossing gate which was damaged by a vehicle which ploughed into it on April 10, have caused crossing due to the absence of the signal light before reaching the gate.

The accident caused the electronic controls installed in recent mounths to be ‘paralysed’ causing the vehicle traffic safety control to revert back to the original 'manual' system.

A road user who declined to be identified said: “Before it was good because from a distance we would know through because there are warning light...now there are none and if motorists are speeding, the situation become more dangerous,” he said.

“This hight spohisticated modern system also lets off a siren 200m before the train reaches the gate in addition to the signal light. This gives vehicles using the crossroads the best security monitoring,” he added.

Meanwhile, an officer the State Railway office when contacted on Tuesday explained that the gate will be repaired in the near future once the tendering process and appointment of a contractor is done.

The officer added that the delay was due to police investigation into the accident cases involving public properties which were just only recently coumpleted.
Posted by wikisabah at 12:38:00 PM