Yong: If true, I will shoot myself 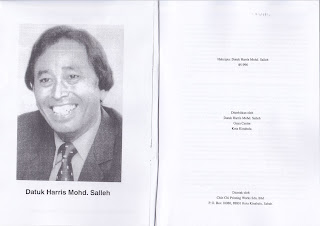 As correctly reported in Sunday's newspapers, the publication on my left was the Hansard (records of the Legislative Assembly sittings) with the Sabah State crest on its cover. The book on my right was the 1996 publication by Tan Sri Harris; no doubt the photo of Tan Sri Harris could be from his Chief Minister days.

But the 1996 book was nevertheless, published in the name of Tan Sri Harris with his signature on it.

Therefore, with due respect, Tan Sri Harris is again mistaken in that he mistook "the logo in the middle of the book (Hansard)" as referring to his book. The "logo" was in fact the State crest adopted by the PBS State Government on 16 September 1988, which is still currently in use today. That "logo" did not exist before 16 Sept. 1988, and most certainly not when Harris was Chief Minister from 1976 to 1985.

If, as Tan Sri Harris said, the book was published between 1976 and 1985 (presumably because Harris meant it to be the Berjaya era when he was Chief Minister), then the state crest would have to be either the 1963 original independence day crest or else the Kingfisher which was used by his administration from 1982 to 1988.

I suggest Tan Sri Harris read a copy of his own 1996 book before he comments further on the withdrawal of the Yayasan Sabah shares certificates. 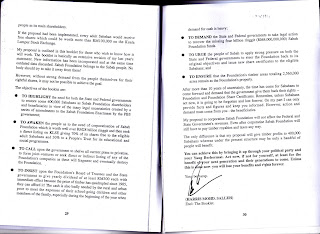 In the case of the so-called RM 300 million losses suffered by Saham Amanah Sabah (SAS) investors allegedly due to NBT/Warisan Harta composite shares swap, then the best way for Tan Sri Harris to get to the truths is to convince his Chief Minister to publish a White Paper to expose the true culprits behind the SAS fiasco. After all, Tan Sri Harris had recently conferred on Datuk Musa Aman as the "best Chief Minister ever" as reported in local newspapers. If there is nothing to hide and if Yong Teck Lee is guilty as alleged by Tan Sri Harris and (Deputy Chief Minister) Datuk Dr. Yee Moh Chai, then why has this government adamantly refused to publish a white paper on the SAS issue?

I agree with Tan Sri Harris that any mistake by a public official in China that cost housewives to lose a massive RM300 million is a "shooting case", meaning death sentence by shooting. If it is true that I had caused RM300 million losses by SAS because of an alleged NBT/Warisan Harta share swap, then I will shoot myself. But if it is shown to be not me but other persons who were responsible for the SAS fiasco, then I only wish that the truths be known to all the people and justice be done. It is for this reason that SAPP and our elected representatives have been pressing for a White Paper on the SAS fiasco and lodged several police reports on the same.