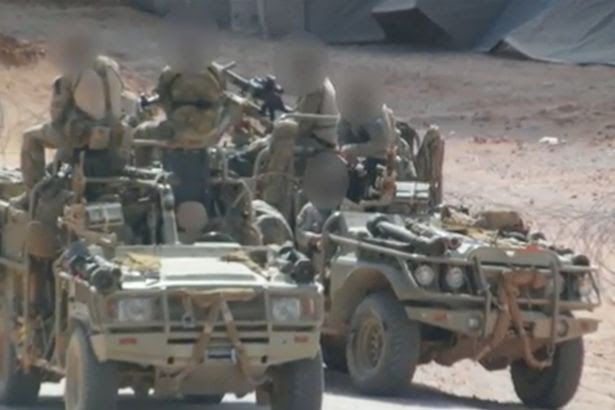 Britain is preparing to send hundreds of crack troops into the Middle East in a massive new drive to smash ISIS in a ground war.

Special Forces from the SAS and commandos from the Special Boat Service are already deep inside Syria and Iraq targeting Islamic State fighters and calling air-strikes.

But as the first pictures emerged of our elite troops in the war-torn region The Daily Mirror learned of plans to send more infantrymen to help out.

Crack forces from the Royal Marines are being earmarked to join the SAS in training up a relatively new warrior force from inside Syria that is devoted to wiping out ISIS.

The rebel group The New Syrian Army is largely made up of defectors and fighters whose families and tribes have been treated appallingly by ISIS in eastern Syria in recent years.

SAS specialists have worked for months to persuade the NSA fighters to agree to send its forces out of Syria and into Jordan for intense war-fighting training.

It means once the NSA has been fully trained by British and US troops they will be able to return to the Syrian frontline and attack ISIS.

Months of coalition air strikes have depleted ISIS by tens of thousands of fighters and now commanders realise there is a need for a major ground assault against the group.

Commanders at the Permanent Joint Headquarters in the UK - which oversees operations alongside other countries - are also looking into linking up with other Islamic forces against ISIS.

The NSA troops will be trained in Jordan and an advance party of UK officers has arrived in the region to set up the training which starts in the next six weeks.

It is thought MI6 and thre French DGSE spy agency are also training up agents - recruited in Jordanian refugee camps - and sending them back into Syria to supply intelligence on the civil war.

British special forces have secretly set up an area inside Syria where the NSA can arrive and be flown into neighbouring Jordan to be trained in battling ISIS.

They were pictured in unusual combat vehicles which the Daily Mirror can reveal are al-Thalab long-range desert warfare vehicles - or Fox vehicles in English.

Sources say a UK training force will include a large number of specialists to deliver medical and communications training as well as infantry teams who will instruct on weapons and tactics.

It will also include a “force protection unit” to protect the camps and oversee training.

The source said: “There are units across the country who have been identified to support this operation, including elements of the Royal Marines.

“The aim is to raise the level of training and capability for these forces.

“As we understand the vetting process has now been agreed, it has been a challenge, as many of these guys are ‘clean skins’ they have little background data that can be checked other than their word.

“But the Americans have established a simple but robust process that we will need to monitor and observe throughout the trainees’ time in the camps. The biggest threat is of infiltration by ISIS.”

Two camps at Al-Quweira are in a remote area in south west Jordan will accommodate more than 3,000 personnel under canvas, with the US manning one camp and the British the other.

The New Syrian Army is a group of Syrian Arab army defectors who formed themselves into the militia force in November 2015 with the sole aim of defeating Islamic State.

They come from the Syrian region Deir al-Zour in which ISIS has overrun many Syrian oil fields but a hardcore of rebels have stood up to the extremist network.

That hardcore has seen thousands of its fighters and supporters executed or murdered by ISIS forces in brutal fighting.

The source said: “The New Syrian Army is highly-motivated and once trained it will have a new impetus to help it defeat ISIS with a lot of support from the coalition.”

It is believed that more than 400,000 habve died in the five year-long civil war whilst millions have been displaced or fled Syria as refugees, many heading for Europe or to camps in Jordan or Turkey.