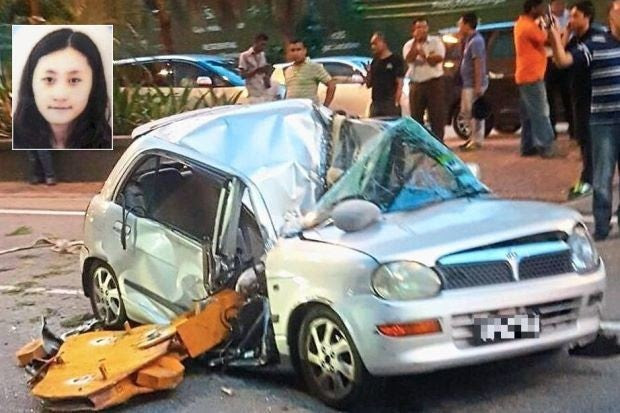 KUALA LUMPUR - Mystery surrounds the man who was operating the crane that broke and its hook fell on to a car killing the driver instantly on Thursday.

The unidentified crane operator has disappeared after he ran away from the construction site immediately after the incident at 7.15pm on Jalan Raja Chulan.

The hook smashed into a Perodua Kelisa from 20 storeys up killing the driver Chin Khoon Sing, 24, on the spot.

The Department of Occupational Safety and Health (DOSH) said it was working with the police to track down the operator. It said the accident occurred due to a series of poor safety regulations.

DOSH said the construction company and the firm supplying the crane are not able to confirm if the crane operator is a Malaysian, a requirement under the Occupational Safety and Health Act 1994.

The crane itself violated safety laws for operating outside the hoard fencing surrounding the construction site.

"There are many parties we are investigating. First the contractor and then there is the company that supplied the crane.

“So now we are trying to establish which party is directly responsible for the accident," said Mohtar.

DOSH believes that the crane hook may have fallen after a rope supporting it snapped.

But the accident would not have occurred if the crane hook was not hovering above a public road.

"There is a hoarding surrounding the building and the crane is not supposed to operate outside the hoarding.

“But the part that fell, was outside the hoarding. It was on the road.

“We suspect that when the wire broke, the crane hook fell on to something and was thrown on the road where it unfortunately hit the car the victim was driving," Mohtar said.

To make matters worse, the driver of the crane allegedly fled the scene.

"We cannot locate this person. We are trying to get his details from his employer. We're not sure if he is Malaysian or whether he was trained properly to handle the crane," he said.

Regardless, Mohtar said DOSH was already preparing investigation papers that could see the parties implicated being slapped with a two-year jail sentence, and up to RM250,000 fines or both under the Occupational Safety and Health Act 1994 and the Factories and Machinery Act 1967.