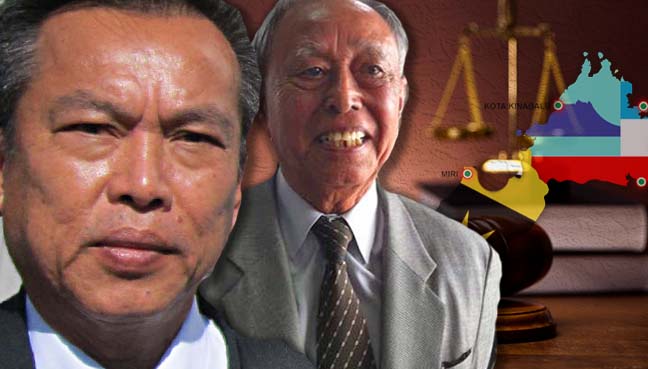 KOTA KINABALU - A human rights advocate has been compelled to rebut former Sabah Chief Minister Harris Salleh’s statement on Tuesday that the basis for the formation of Malaysia was not “legally binding”.

Harris, reiterated Daniel John Jambun in a telephone interview, “was party to an illegality” by taking the position that the various constitutional documents on Malaysia were not “legally binding”.

“He compounded the mistake by urging the Federal Government to clarify and explain the documents to lay the matter to rest once and for all,” noted Jambun who heads the UK-based Borneo’s Plight in Malaysia Foundation (Bopim).

Clearly, lamented the human rights advocate, he expects Putrajaya to endorse the position he has taken.

“Harris thinks the matter should be referred to the Attorney-General (AG) to issue a statement to bring closure.”

Briefly, stressed the Bopim Chief, Harris has erred on the facts and law. “If any issue arises on the constitutional documents on Malaysia, only the Federal Court can make a ruling and/or declaration.”
“That’s law.”

The Federal Court, pointed out Jambun, can sit as the Constitutional Court. “The AG and the Federal Government, or Harris for that matter, are not law.”

He expressed disappointment that “Harris continues to mislead public opinion” on the constitutional documents on Malaysia.

“It makes us wonder whether he’s with the people of Sabah and Sarawak or with Malaya’s ‘non-compliance’ on the matter.”

“Article VIII of the Malaysia Agreement provides that the Government of the Federation of Malaya, North Borneo and Sarawak will take such legislative, executive or other action as may be required to implement the assurances, undertakings and recommendations contained in, inter alia, Annexes A and B to the Inter Governmental Committee Report (IGC), in so far as they are not implemented by express provision of the Constitution of Malaysia.”

If MA63 was not legally binding, argued Jambun, the Federal Court would not refer to it, the IGC Report and elsewhere — in its ruling — to the Cobbold Commission Report.

He does not expect the AG and the Federal Government to issue the statement, that Harris keeps demanding, on the constitutional documents.

Jambun, at the same time, does not expect the AG/Putrajaya to refer the matter to the Federal Court. “Even if it was taken to Court, the latter will not rule and/or declare the constitutional documents are not legally binding.”

“The AG/Putrajaya should know that. That’s why they would not go to Court on the matter.”
MA63 is an International Treaty signed by five governments — the UK, North Borneo, Sarawak, Singapore and Malaya — and lodged with the UN Secretary-General also as a “Trust Deed”. “The Malaysian Parliament cannot rule against it,” he said.

Indeed, said Jambun in citing a principle in law, even the Federal Constitution was null and void to the extent of its inconsistency with MA63 and other constitutional documents.

“The Federal Constitution has to be read together with the constitutional documents on Malaysia.”
He was referring to the Federal Government’s oft-cited non-compliance on MA63.
Posted by wikisabah at 5:22:00 PM