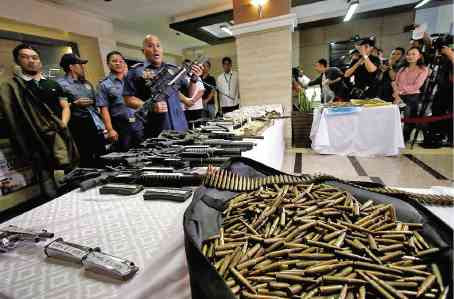 The leader and members of a gunrunning gang arrested in San Juan City for allegedly supplying high-powered firearms to the Abu Sayyaf and Mindanao warlords deserve the death penalty, the country’s top cop said on Tuesday.

“This is a serious offense, isn’t it? Giving firearms to the enemy. How I wish we could execute by firing squad those who are responsible for this,” Philippine National Police chief, Director General Ronald dela Rosa, told reporters at Camp Crame as he inspected the P6 million worth of firearms seized from the group.

Unding, according to the police, lost when he ran for Sulu vice governor in the last elections. He ran as an independent.

Dela Rosa said he believed that the weapons would be used  in intensifying the Abu Sayaff’s kidnapping and terrorist activities as well as in strengthening the group’s defenses against government forces in Sulu and Basilan provinces.

He ordered CIDG director Chief Supt. Roel Obusan to complete the investigation of the suspects’ activities and “leave no stones unturned.”

Obusan and ATCU head Chief Insp. Roque Merdegia Jr. said the CIDG received information in July that Unding and a certain Wahid, both natives of Indanan, Sulu in Mindanao, were  operating a gunrunning group supplying high-powered guns to Abu Sayaff and warlords in the Autonomous Region in Muslim Mindanao.

The CIDG said the contraband were hidden in sport utility vehicles which were then transported on Ro-Ro ferries to their final destination in Mindanao. - Inquirer
Posted by wikisabah at 5:22:00 PM