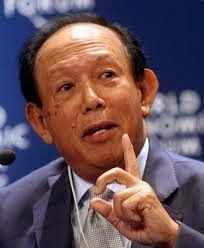 Malaysia is going downhill and may end up like how the Philippines was once before, former deputy prime minister Musa Hitam warns.

Musa noted that since the government is faced with mega scandals, other matters, such as shootings in broad daylight, are not dealt with.

The people, he added, are getting used to the situation, and like the Philippines of the past, are carrying weapons for self-defence.

Dubbing this as the “new normal”, Musa said: "I think the country is moving downhill. The speed is slow, but it could develop into a fast slide.

"I was witnessing the Philippines in the past. It was going towards a failed state... I used to say, ‘My God, security, arms, in any settlement of grouses (in the Philippines)’. This did not happen in our country."

Speaking to reporters after the launch of his new book “Frankly Speaking” in Kuala Lumpur today, Musa added: "Tell me now, that's what is occurring in our country.”
Posted by wikisabah at 5:47:00 PM