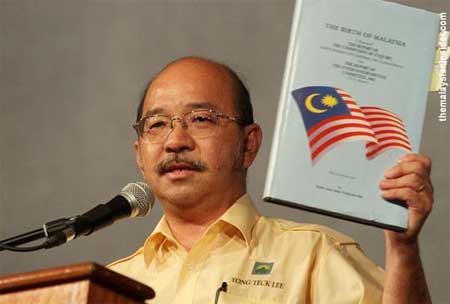 “That is why Sabahans of all races are going back to Sabah parties,” tweeted Yong Teck Lee, who was Sabah chief minister from 1996 to 1998.

Asked why he said so, Yong explained it is because the country is seriously affected by racial and religious polarisation.

The Sabah Progressive Party (SAPP) president added that people are divided due to political conflict caused by racial politics.

“Whereas, Sabah and Sarawak are harmonious. Malaysia is being bankrupted by Malaya parties,” he told Malaysiakini.

But Yong denied that his comments were in relation to Penampang lawmaker Darell Leiking’s decision to quit PKR and team up with former Umno vice-president Shafie Apdal in an anti-BN “Sabah platform”.

“(It’s based on an) overall situation, not just about Darell,” said Yong.

However, Yong said the return of leaders like Leiking from peninsular Malaysia parties to Sabah-based ones, proved they could see the futility of parties of the former kind.

“Malaya politics is so divisive; (it is) not good for Malaysia. Not good for Sabah and Sarawak.

“The trend is that more and more people will leave (national) parties to go to Sabah local parties,” Yong said.

Leiking yesterday quit PKR and was at the Registrar of Societies with Shafie to submit an application to take over an existing party.

By Alyaa Azhar, Malaysiakini
Posted by wikisabah at 7:09:00 PM