United Sabah Alliance open to cooperation with Shafie and Leiking 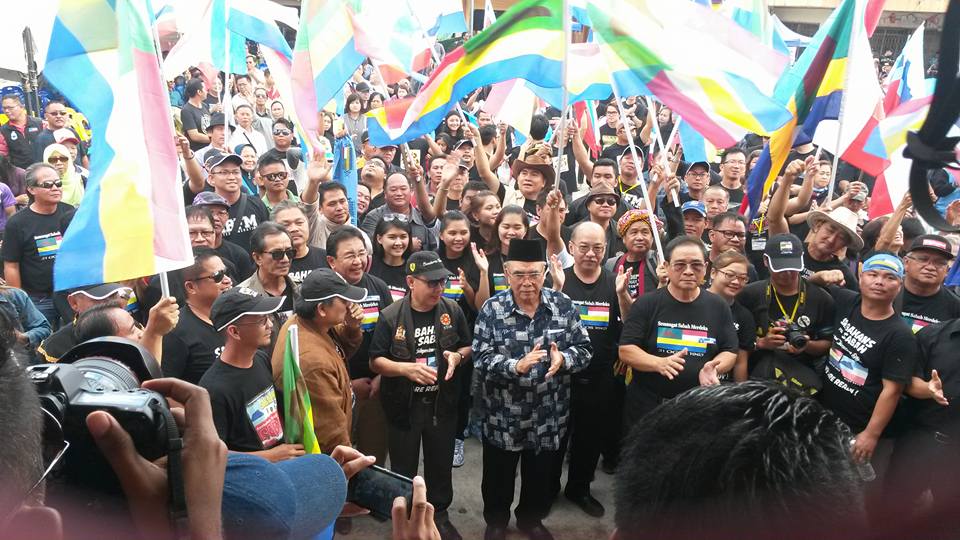 KOTA KINABALU - Opposition parties in Sabah are cautiously welcoming Datuk Seri Shafie Apdal to the fray, saying they were prepared to work with his party for the good of Sabahans.

Shafie is taking over an existing local party with the intention of turning it into a multiracial platform with Sabah interests at its core.

It has also won the allegiance of Penampang MP Darrell Leiking, who quit PKR on Wednesday to ally himself with Shafie. Leiking will bring with him crucial Kadazandusun Murut support.

Jeffrey, who helms the United Sabah Alliance front comprising STAR Parti Cinta Sabah and Sabah Progressive Party(SAPP), said they were open to cooperating with both Shafie and Leiking.

“USA is confident of our stand and we see them as potential partners...not adversaries,” he said when contacted by Malay Mail Online, adding that they will considering a seat sharing formula with Shafie’s yet-to-be named party.

Jeffrey, who is Bingkor assemblyman, is the only representative from a Sabah-based opposition who won in Election 2013

Gabungan Rakyat Saksama, a Sabah and Sarawak based coalition of seven local parties, had earlier this year indicated its intention to rival USA, but has yet to become a credible alternative.

Shafie announced that he will take over an existing Sabah-based party, but declined to identify it beyond saying it was registered in 2013.

He added that it will be rebranded with a new logo and leadership.

Leiking and Sulabayan assemblyman Datuk Jaujan Sambakong accompanied Shafie to the Registrar of Societies in Putrajaya to submit the application.

Leiking announced his resignation from PKR shortly after, saying he was opting for a platform that was more focussed on Sabah and its issues.

It is believed he will likely serve as deputy president.

Another PKR assemblyman, Terrence Siambun, is also rumoured to be joining.

KOTA KINABALU: A decision by PKR vice-president Darell Leiking to quit the party is setting the stage for another bruising round of political manoeuvring in Sabah PKR which has a history of upheavals.

Though the Penampang MP tried to keep his polite exit under wraps as he aligned himself with Datuk Seri Shafie Apdal’s new Sabah-based opposition party, Sabah PKR is set to see fresh movements out of the party amid perception that a locally-based opposition would be the better choice to address state issues.

Already there are signs that the party’s Moyog assemblyman Terrence Siambun and at least two other assemblymen may move towards Shafie’s takeover of an existing shell party registered in 2013.

“We will have to wait and see,” said Sabah PKR deputy chairman Christina Liew, the Api-Api assemblyman, who declined to comment further amid the latest developments in the party which has been beset by tumultuous resignations in its two decades in the state.

Senior leaders, including Sabah PKR chief Datuk Lajim Ukin, are also assessing the developments as internal chatter of more defections to come, as early as next week.

Lajim, who has denied quit rumours on several occasions, has also been vociferous with the PKR central leadership over its promise of more autonomy for Sabah PKR.

Despite the civil manner of the departures, PKR insiders said these would severely impact the national PKR – and to a certain extent, DAP – in the coming general election as Shafie might be changing the face of the opposition back to local Sabah politics.

Insiders said they did not know how or what deals had been made or were going to be made in the event a locally-based coalition of opposition parties materialises as it would impact PKR and DAP.

Shafie has not yet shown his political cards but has been open about working with all opposition parties against Sabah Barisan Nasional led by Sabah Umno, which is headed by Chief Minister Datuk Seri Musa Aman.

USA has been asking DAP and PKR to concentrate on peninsular Malaysia and at the same time, leave Sabah opposition parties to take on Barisan here.

In the 2013 general election, Sabah PKR scored a major breakthrough in the state, winning seven of the 60 state seats and one of the 25 parliamentary seats.

But they lost three assemblymen – Jeremy Majalad (Kadamaian) and Jelani Hamdan (Matunggong) within the year – while Bumburing, the Tamparuli assemblyman (a non-governmental organisation member who won on a PKR ticket), stayed away from PKR to eventually take over Parti Cinta Sabah earlier this year.
Posted by wikisabah at 3:52:00 PM