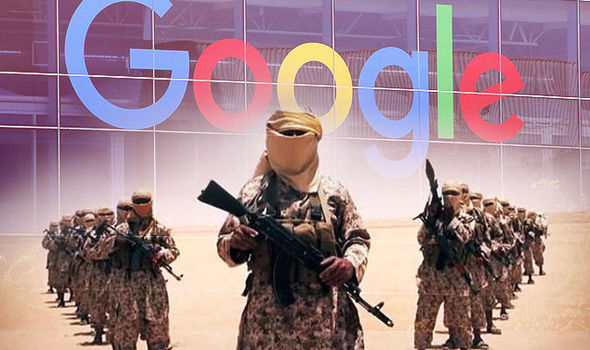 GOOGLE has launched a massive online fightback against evil Islamic State (ISIS) in a bid to wipe out the group’s poisonous propaganda.

The Internet search giant has developed an ingenious programme designed to put off would-be jihadis who search the web looking for information about the twisted terrorist group.

Under the radical new scheme youngsters at risk of falling prey to Islamist extremism are greeted not with gruesome ISIS propaganda, but instead material showing the true nature of the barbaric death cult.

A pilot of the project has proved to be a huge success, with more than 300,000 would-be jihadis worldwide potentially being put off the terrorist group for good in a matter of months.

Technicians at the online giant have combed through reams of data associated with extremist youngsters who have gone to fight for ISIS in Syria to find out which terms they searched.

People who search those set phrases still get a results page but are also greeted with prominent targeted adverts, which link to YouTube videos showing the true nature of ISIS’ barbaric regime.

The short clips feature ‘organic’ content including testimonies from former jihadis, smuggled video recordings from inside cities like Raqqa and Mosul and denouncements of ISIS by prominent Imams.

They are in Arabic and English to appeal to any would-be ISIS sympathiser, and data from the project’s pilot period indicates that the scheme could have a profound effect on the terrorists’ ability to attract foreign recruits.

Of the roughly 3,000,000 people worldwide to search ISIS-related terms during a two-month period earlier this year nine per cent - or around 300,000 - clicked through to the videos.

Google says that is a much higher ratio than paid-for advertising normally converts at, which is around two per cent.

Furthermore, analysis shows that people who clicked through to the videos spent on average eight minutes watching them, meaning they were taking on board the messages involved.

The project has been developed by Google’s tech lab Jigsaw and could now be rolled out on a wider basis.

Yasmin Green, Jigsaw’s head of research and development, told Wired: “This came out of an observation that there’s a lot of online demand for ISIS material, but there are also a lot of credible organic voices online debunking their narratives.

“The Redirect Method is at its heart a targeted advertising campaign: Let’s take these individuals who are vulnerable to ISIS’ recruitment messaging and instead show them information that refutes it.”

Jigsaw is set to get together with London-based startup Moonshot Countering Violent Extremism and the US-based Gen Next Foundation next month to launch a second phase of the programme which will focus on educating not only would-be jihadis, but also white supremacists.

The programme is seen as a welcome change from the current battle against ISIS propaganda, which has seen Internet search giants and social media companies having to remove thousands of gruesome videos and messages posted by the terrorist group every day.

ISIS is widely known as a hugely effective user of online propaganda, with which it has been able to attract thousands of foreign fighters to join its so-called Caliphate in the Middle East.

And Ms Green says Google’s new technology could even be used in the future to target Westerners already in Syria and Iraq, who could be persuaded to return home.

She said: “Further down the funnel are the people who are sympathetic, maybe ideologically committed, maybe even already in the Caliphate. That’s Jigsaw’s focus.

“These are people making decisions based on partial, bad information.

“We can affect the problem of foreign fighters joining the Islamic State by arming individuals with more and better information.”

Hummer Khan, the executive director of the Islamic counter-extremism group Muflehun, said the Google programme will help in the fight against ISIS but is not a solution of itself.

She said: “If they can hook people in, can they keep them coming back with new and relevant content? That’ll be important.

“This sounds like a good piece of the solution. But it’s not all of it.”

At the height of its powers ISIS had more than 30,000 jihadis across the Middle East, up to a third of whom had travelled to fight for the group from abroad.

Europol has estimated that as many as 5,000 people from Europe have gone to Syria and Iraq to join the bloodthirsty group since it declared its so-called Caliphate in 2014, with around half having since returned.

By Nick Gutteridge
Posted by wikisabah at 5:48:00 PM