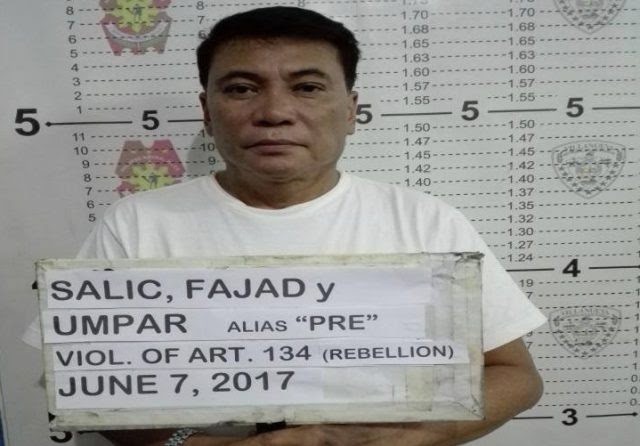 COTABATO CITY, Philippines — A former mayor of Marawi City was arrested in Villanueva town, Misamis Oriental Wednesday night for his alleged links to the Maute group that has been battling government forces in the Lanao del Sur capital since May 23.

Fajad “Pre” Salic, who is wanted for rebellion, was nabbed at a police checkpoint in Barangay San Martin past 7 p.m. Wednesday. He was traveling with three companions in a pickup truck from Manila to Cagayan de Oro City.

Salic, who was once married to actress and politician Alma Moreno, was also among local government executives publicly accused by President Rodrigo Duterte of involvement in the drug trade.

Superintendent Lemuel Gonda, spokesman of Police Regional Office 10, said Salic’s link to the Maute was through his first wife, who is related to the clan. Reports describe her as a sister of the first wife of Cayamora Maute, father of the brothers who formed the extremist group that sparked the Marawi crisis and, authorities say, have pledged allegiance to the Islamic State.

However, no contraband was found during the search of Salic’s vehicle.

Gonda said Salic denied any links to the extremist group and said he has been staying in Manila and would have turned himself in had he known he was being sought over the Marawi crisis.

He also quoted the former mayor as saying he had immediately surrendered as soon as he learned he was being linked to the drug trade.

Salic is scheduled to be brought to Cagayan de Oro on Thursday.