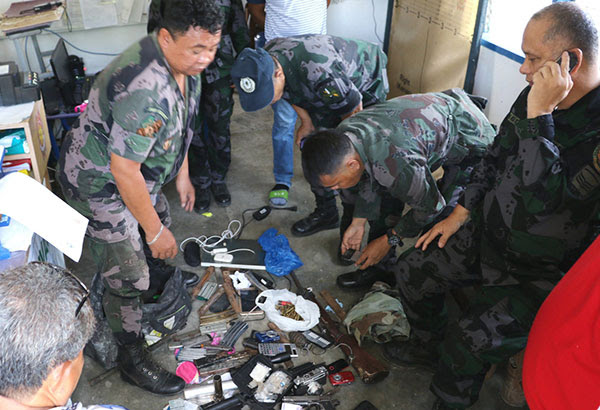 MANILA, Philippines -  Security forces yesterday seized firearms and ammunition during a raid on a house in Misamis Oriental of former Marawi City mayor Fahad Salic, who is under arrest for rebellion.

In Pandag town in Maguindanao on Wednesday, authorities arrested five suspected drug traffickers with alleged links to the Middle East-based Islamic State (IS).

Salic and his brother, incumbent Marawi City Vice Mayor Arafat Salic, were tagged as major backers of the Maute militants who laid siege to some parts of Marawi City – the country’s only Islamic City – last May 23.

Arafat eluded arrest during a raid on his house in Marawi and is now believed to be fighting side by side with the Maute terrorists.

The military and the police are still trying to flush out the militants from Marawi City where they had intended to establish their IS-inspired Southeast Asia “caliphate.”

The militants were using snipers and hostages to delay the advance of troopers.

Currently, only four of the 96 barangays in the city are in the hands of the terrorists, according to the military.

The Salics were believed to be financing Maute’s terror and criminal activities using drug money.

Maguindanao police chief Senior Supt. Agustin Tello said police and soldiers from the 33rd Infantry Battalion launched the operation against the five based on a tip from their neighbors, including barangay officials and Muslim community elders.

Recovered from the five suspects were shabu, assorted firearms, a fragmentation grenade, a laptop, gun parts, cameras and P16,000 cash.

“We ought to thank the LGU of Pandag and the 33rd IB for this feat,” Tello said.

Pandag Mayor Zihan Mamalinta-Mangudadatu, chair of the municipal peace and order council, said the local police and barangay tanods in the municipality are on alert against possible retaliation by the accomplices of the five suspects.

Meanwhile, the three men accosted last Sunday by the Philippine Coast Guard (PCG) at the Cagayan de Oro City port while reportedly attempting to move P30 million in cash to Cebu without notifying authorities have been charged before the prosecutor’s office.

PCG spokesman Commander Armand Balilo said the three unnamed employees of the United Coconut Planters Bank were charged with violation of special banking laws before the CDO prosecutor’s office upon recommendation by representatives of the Bangko Sentral ng Pilipinas (BSP).

“They were presented before the prosecutors for inquest proceedings. Our arresting PCG law enforcement team submitted affidavits and testified against them,” he said in a text message yesterday.

After the inquest, the prosecutors are expected to issue a resolution and decide whether or not to file the case against the three before the Cagayan de Oro regional trial court.

The PCG official said they would respect the findings of prosecutors, including the possibility that transport of the cash was a legitimate exercise as claimed by the bank.

But when asked if authorities are looking into possible link of the incident to the ongoing clash in Marawi City, Balilo answered in the affirmative.

“Of course on the side of the security forces we are being very careful on the disposition of the money to include possible link with the situation in Mindanao. We have to be vigilant,” he explained.

The PCG earlier said the three employees of UCPB were about to board a Trans Asia ship bound for the Port of Cebu when intercepted by operatives of the Northern Mindanao District last Sunday.

The estimated P30 million was placed inside four Styrofoam boxes and reportedly declared to be documents.  – With John Unson, Edu Punay
Posted by wikisabah at 10:50:00 AM