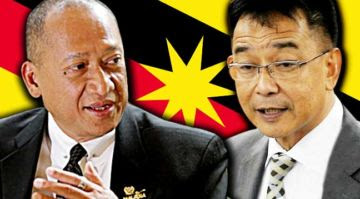 Sarawak PKR chairman Baru Bian has branded the outburst by Tourism and Culture Minister Nazri Aziz against the state’s own tourism minister as a reflection of Putrajaya’s arrogant and patronising attitude towards the east Malaysian state.

He said the “dismissive, insulting and condescending” response to state minister Abdul Karim Hamzah’s stand against the imposition of a federal tourism tax made it questionable if Sarawakians can realistically expect the Barisan Nasional (BN) and Umno-led federal government to agree to autonomy for the state, or even devolution of power.

The Ba’kelalan assemblyman said the state should be thankful for the outburst as it had displayed the “unspoken contempt and disdain” held by BN and Umno towards the Borneo states of Sarawak and Sabah.

“No doubt, they will be scrambling for damage control now, as they still need our rural voters to return them to power at the next elections,” he said in a statement today.

“We are the fixed deposit vote bank for them and our oil and gas resources are the ATM for Malaya’s development and as the bailout funds for BN cronies’ and families’ misadventures,” he said.

Baru called on people not to be fooled. “Things said in the heat of the moment usually are an accurate reflection of a person’s real feelings, and Nazri has laid bare his and BN/Umno’s face for all to see,” he said.

He said the federal government was only “playing” by having talks on issues like devolution of power.

“They have no intention of returning any of our rights to us and the chief minister (Abang Johari Openg) should not be so accommodating of them,” he said.

“For example, why have the oil royalty talks been suspended? We have not been clearly informed.”

On May 22, Abang Johari had announced that the state was putting on hold further talks with Putrajaya on increasing oil royalty from 5% to 20% until global crude oil prices recover.

Nazri had yesterday told Karim to watch his mouth when issuing statements against the federal government.

This was after The Borneo Post reported Karim calling the new tourism tax a glaring example of the federal government imposing tax laws in Sarawak without consultation.

“Learn to be a minister before you open your mouth and remember that in politics you shouldn’t talk so big,” Nazri had said. “If you think you’re a gangster, there are bigger gangsters than you.”

Baru said Abdul Karim’s stand was correct as the federal constitution was initially silent on tourism.
He said Parliament created legislation for tourism in 1994 by including it in the constitution’s federal list.

“However this was done without prior consultation and approval from the governments of Sarawak and Sabah. Therefore this legislation is null and void,” he said.

“Abdul Karim was absolutely correct to oppose the tourism tax and speak up against the federal minister to protect our rights,” he added.
Posted by wikisabah at 3:32:00 PM