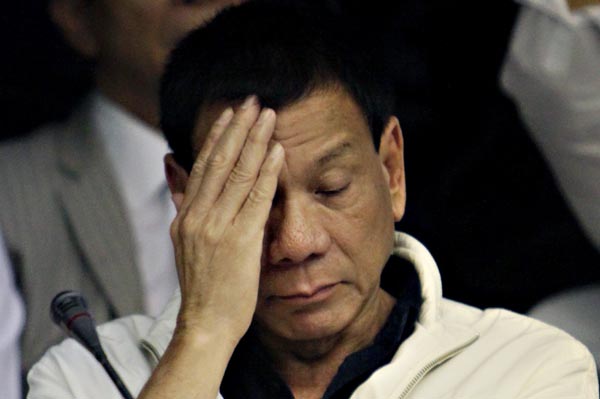 MANILA (Reuters) - Philippine President Rodrigo Duterte is alive and well and experiencing no health problems, the government said on Tuesday, amid concerns about his disappearance from the public eye for unusually long periods this month.

Known for a busy schedule and lengthy speeches often several times a day, the 72-year-old Duterte's low profile has fuelled rumours he is in declining health and that the government is trying to keep that under wraps. He was last seen in public a week ago.

What has created most intrigue is Duterte's absence during what is the biggest crisis of his year-old presidency, as the military battles for a sixth week to defeat Islamic State-linked rebels currently occupying Marawi City on his home island of Mindanao.

"First and foremost, he is alive and well, he is very well, he's just busy doing what he needs to do,", presidential spokesman Ernesto Abella told reporters.

"As you've seen he's been very much in the public eye but being out of the public eye, that is when he is able to do office work, he signs papers, he reads, he consults, he's actually very busy.

"The thing that is very important to note is that he is on top of every situation, he is aware of what's happening, he's updated regularly, he reads, he listens and he's quite aware. This is just his working style."

The maverick leader was due to meet some cabinet members on Tuesday and attend an event at the Presidential Palace in Manila to mark the end of the Eid al-Fitr Islamic holiday.

Duterte's absences during June represent the longest periods he has been out of the spotlight. He was last seen on June 20 in two cities close to the violence-torn Marawi, visiting soldiers and evacuees.

That followed a three-day absence after a speech in which he said his health was "immaterial", amid raised eyebrows about his failure to appear in public for Independence Day on June 12.

Duterte's known ailments include back problems, migraines due to nerve damage after a motorcycle accident and Barrett's oesophagus, which impacts his throat. He also suffers from Buerger's disease, caused by his heavy smoking in younger days, which can cause blockages in the blood vessels.

His office has recently said he has been experiencing fatigue. His closest aide, Christopher "Bong" Go, on June 15 posted images on social media of Duterte signing documents and standing in front of a television showing a news bulletin, adding further fuel to rumours that something was wrong.

"The public should not worry," he told DZMM radio. "Our president is healthy."

(Reporting by Martin Petty)
Posted by wikisabah at 3:44:00 PM