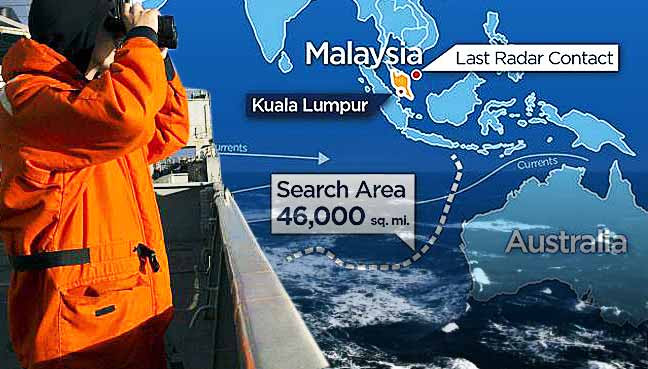 CANBERRA - An Australian research team on Wednesday claimed that they have narrowed the location of missing Malaysia Airline flight MH370 to just a fraction of the ocean search area previously explored by Australian, Malaysian and Chinese authorities, China's Xinhua news agency reported.

David Griffin, head of the team from the Commonwealth Scientific and Industrial Research Organisation (CSIRO), said his team had continued analyzing drift modelling data well after the ocean search had concluded, estimating that the plane went down along the "seventh arc."

"There's a strong current crossing across the seventh arc at (a latitude of) 35 degrees south, so we think the plane crashed into that current going to the north-west ... that explains why debris didn't arrive in Australia," he said at the Australian Marine Sciences Association (AMSA) national conference in Darwin.

In January, a joint statement from the governments of Australia, Malaysia and China said the ocean search for MH370 would be "suspended indefinitely" until "credible new evidence" came to light.

MH370 was a scheduled passenger flight bound for Beijing from Kuala Lumpur. It disappeared on March 8, 2014 with 239 passengers and crew on board.

During the ocean search operation which lasted for two years, authorities combed a 120,000 square km patch of the Indian Ocean to no avail, with no sign of the plane yet to be found.

According to Griffin, the researchers buried themselves in satellite data to determine the exact sea level height on March 8, 2014 - when the jet disappeared - and from that, they were able to determine the direction in which ocean currents flowed.

"So that's the basis of how we know this current was flowing across the seventh arc at this time," Griffin said at the conference.

He said that CSIRO - Australia's government-funded scientific agency - had passed on the information to the authorities in charge of the search of MH370, but the government has not yet mentioned whether or not the ocean search would resume. - Bernama
Posted by wikisabah at 1:53:00 PM