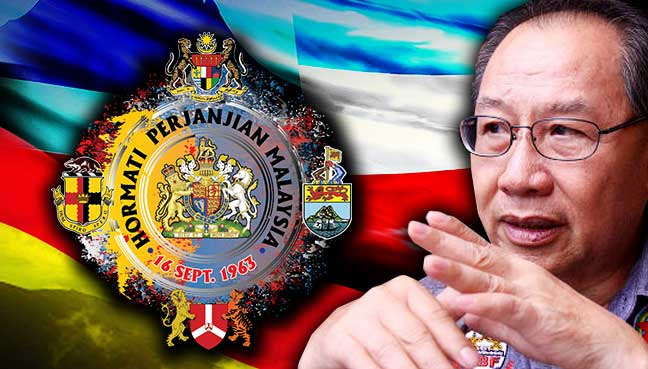 “Instead of being treated as equal partners, the Borneo States have long been marginalized and treated as colonies of Malaya. Worse still, their oil and gas resources and revenues have been siphoned off to develop Malaya and they end up undeservedly as the poorest States and invariably controlled by the federal government,” added Dr. Jeffrey.

Dr. Jeffrey further opined that the widespread unhappiness of Sabahans and Sarawakians and rising nationalism for Sabah and Sarawak rights especially under the 20/18-Points, IGC Report and Article VIII of the Malaysia Agreement (MA63) have created an unique opportunity for the present federal government to create a new SUSTAINABLE MALAYSIA.

If the present federal government fails to seize the opportunity, the Sabah and Sarawak rights will be the top and most controversial election issue in the forthcoming PRU-14.

Whoever wins to form the new federal government after PRU-14 will have the opportunity to address the Malaysia formation problems and grapple with the resolution of the rights of the Borneo States.

The action of the Sarawak government to send a legal team to London and undertake research of the formation of Malaysia has further heightened the issue of the Borneo rights. Taken from the perspective of their Sarawak rights, it is nothing less than just one of the desperate attempts at seeking a solution to address the non-compliance of the basis of the formation of the Federation of Malaysia.

For the present and incumbent federal government, it has the first opportunity and first bite at the cherry to resolve the Malaysia problems. If they fail to do so before PRU-14 and loses incumbency in the elections, they only have themselves to blame for losing.

If after PRU-14, the new federal government still fails to review the basis of the formation of Malaysia and continue to violate the basis of its formation, it will not be surprising to see the demands for the restoration of Sabah and Sarawak as equal partners and the fulfilment of their Borneo rights, snowballing into demands for outright independence outside of Malaysia in the foreseeable future.

As it is, a recent survey has revealed, not surprisingly, that 67% of the people in Borneo States wish to see Sabah and Sarawak having autonomy from the federal government. Any non-resolution of MA63 and violation of the Federal Constitution will surely see the support for autonomy being converted into support for independence as well as changing the minds of the other 33% to strongly support Sabah and Sarawak rights.

At the Sabah level, the present mood is for a NEW SABAH GOVERNMENT that is pro-Sabah rights and strong to stand up to Kuala Lumpur. It also sounds the rejection of the present Umno-BN government which is seen to be weak, unable to protect Sabah’s rights and interests, put to shame by the actions of the Sarawak government, and subservient to their political masters in Kuala Lumpur.
Posted by wikisabah at 5:00:00 PM