Umno's policies: No end in sight

"Racism does not have a good track record. It's been tried out for a long time and you'd think by now we'd want to put an end to it instead of putting it under new management.'

In a recent op-ed piece attacking the Star over its ‘Tanda Putera' coverage, former Information Minister and Editor of Utusan Malaysia, Zainudin Maidin, took the propaganda (for whom remains to be seen) organ to task for placing commercial instincts over patriotism.

He reminded 'Malaysians', to let the Chinese, - "Biarlah orang-orang Cina terus berjuang menerusi media dan sebagainya untuk Self Isolation." - segregate themselves at the expense of being ‘Malaysians'". 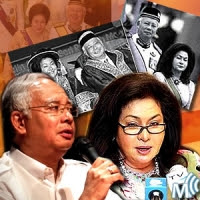 This being Umno, it should surprise nobody that current Prime Minister Najib Abdul Razak (left), then goes on to inform GLCs and government departments that they should advertise more in Utusan.

But why? Utusan by its own chest thumping has claimed that it is not interested in being commercially viable only that it serves the higher purpose of patriotism.

Najib lauded the paper as being a national asset that was interested in preserving the federal constitution. However, this paper has been sued numerous times and lost. This is a paper whose own editors admit to spinning and fabricating for the government.

Now, no one who understands the history of Utusan and the various firebrand editors of it past would recognise the paper that propagandises for Umno today.

And in true Umno fashion, a newspaper which has demonised the non-Malay communities and been the platform for hate speeches from various quarters, is assured that it would be bailed out by GLCs and government departments funded by the taxes of all Malaysians.

This unfortunately has been the sad narrative of this country for decades.

Pandering of the right wing

However, this was just the beginning of the pandering of the right wing Malay element, which is crucial for the survival of the current crop of Umno Malay elites.

Prime Minister's Najib's announcement of his grand vision to perpetuate Umno hegemony through the Bumiputera Economic Empowerment initiative is merely the continuation of that old game, where the Malay polity is anesthetised with affirmative action programs to distract them from the reality that they are lagging behind and that this happened under the Umno watch.

Najib pointed out that the Chinese household income was fifty percent higher than bumiputera households. Never mind the convenient switch from "Malay" to bumiputera - this definition introduces a whole other set of variables considering that most Malay household incomes are probably higher than the average Orang Asli or Indigenous people of Sabah and Sarawak.

The question remains that after decades of Umno rule, with affirmative action programs that has changed the face of the civil service and economic policies designed to "uplift" the Malay community; why is the Malay community in the state they are in now, always preoccupied by the other communities and engaged in war where the slice of the economic pie, which is growing smaller as the decades roll on, being the main source of contention?

Moreover, on a related note, now that Hindraf has released its first 100 days in "office" document (which is an admirable thing) what does this say about the disenfranchised community that a pact with Umno was supposed to address?

While Najib continues to succour the community he claims helped Umno retain power, what of the grand plans of Hindraf and P Waythamoorthy who pleaded with the Indian community to return a two-thirds majority to Umno?

Apparently, Umno is willing to embark on programs that would help minority Bumiputera communities (let's leave the "Malay" community out of this for a minute) but has very little interest in helping a sidelined Indian minority, with the exception of reminding a non-elected Indian minister in his cabinet, of his place in the Umno scheme of things.

However, nobody is really shocked by this turn of events. Racial pandering is what this country is all about.

Pre elections, PM Najib made it very clear he was pandering to the Chinese community in the hope that they would abandon the DAP and return to the MCA.

He made a pact with an Indian NGO that the Umno establishment had deemed a threat to national security.

The problem with Umno is that they have not realised how deep the hole they have dug for themselves and the Malay community.

Nobody takes the PM reassurances that the non-Malays will not be sidelined seriously, merely because, the non-Malays have for the most part thrived under the Umno system.

The Chinese community's abandoning of the MCA was a clear indication that they did not need representation in the cabinet if it meant the kind of representation, which has resulted in the quagmire we are in.

Post 1969 racial programs have resulted in a Malay middle class deeply divided by the realisation that Umno hegemony means subservience to policies anathema to a national identity, or dependency on polices which hamper them in competing with the other communities in Malaysia, while maintaining ethnic superiority, which in the end means very little.

All these so-called new empowerment programs will encourage is the perpetuation of a rent seeking culture, patronage, corruption, cronyism and entitlement which would merely encourage a whole new generation of Malay, Indian and Chinese charlatans, tricksters and opportunists who would play the system, all the while whining of how corrupt the system is.

However, the bumiputra community is already in competition. The Malay bumiputera are in competition with the Indonesians, Burmese, and other such ethnic groups some who have been lucky enough by anointment of religion, to be granted bumiputera status.

However the deeper class resentments, which is the rallying cry of the Malay Opposition, is further dividing the Malay community that no amount of entitlements or "goodies" can bridge.

There are roughly two classes of Malays that by virtue of education and patronage would see them either to our civil services or the comfortable environs of the various GLCs powered by the unbridled greed and apathy of Malaysians who for decades voted for the Umno establishment.

When the prime minister ask us "not to misunderstand the Malay economic empowerment", only the most ignorant, uniformed, myopic Malaysian would view these programs as anything other than a detriment to the Malay community and a possible boon to the unscrupulous Malaysians, would make use of the system to further their own agendas.

By S THAYAPARAN, a Commander (rtd) in the Royal Malaysian Navy. Mkini news
Posted by wikisabah at 4:15:00 PM